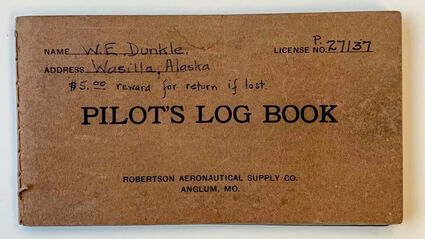 Dunkle's personal flight logbook. Simple and unadorned, much like the man. Alas, the Alaska Aviation Museum will most likely not see that five dollars.

As we honor tradition and significant achievement toward mining, mineral exploration, or all-around trailblazing in Alaska, there are many individuals who have been immortalized through the Alaska Mining Hall of Fame. Among these legends is Wesley Earl Dunkle, whose impacts on Last Frontier aviation are as memorable as his mining exploits and possibly even more strongly felt today.

An Alaska mining legend in his own right, "Chuck" Hawley was a founding member of the Alaska Mining Hall of Fame and a central driving force for the selection of many inductees, writing more than half of the backgrounds of each name selected until his passing in 2016.

However, different from the usual suspects, Hawley had taken particular care to compile a well-documented and compelling story about one of Alaska's pioneer prospectors and mining engineers, Wesley Earl Dunkle.

Pennsylvania Dunkle built for the North

Known to his old and close friends as Dunk or Bill and to his Dutch-German family that moved to Pennsylvania in the 1730s, he was Earl.

Born in Clarendon, Pennsylvania, in the spring of 1887, Dunkle was raised in nearby Warren when his father, John Wesley Dunkle, was appointed county attorney.

Dunkle would attend public schools in Warren and would graduate with honors from Sheffield School of Yale University in 1908. Shortly after graduating, however, the young Dunkle would read of the Guggenheim's plans to build a railroad to tap rich copper deposits in what would become the famed Kennecott Mine in Alaska's Wrangell Mountains.

Immediately resolving to head north, he arrived in August 1910.

Dunkle's career as a prospector in Alaska's early days, when transportation infrastructure was virtually non-existent, "demanded the physical strength that he inherited as a Pennsylvania Dunkle," Hawley wrote. "Dunkle men typically were tall and powerful. The characteristics were so common that a Pennsylvania Dutch phrase, 'Dunkle Stout-like,' was applied generally, not just to the Dunkles, to describe extraordinary physical prowess."

Which would most certainly have benefitted Dunkle in the rugged lands of the Far North.

His first position out of school was at the Guggenheim's Beatson Mine on Latouche Island in Prince William Sound. By December 1911, he was promoted to field engineer. In that position, he had two main jobs, first, to examine mining properties for Stephen Birch and the Guggenheims; second, to undertake geologic studies at Birch's Kennecott mine in the Wrangell Mountains.

In the 1920s, Dunkle would return to project examination, managing development operations for the Guggenheims at Mt. Eielson near Kantishna and the Mabel mine in the Willow Creek District, and by the end of the decade, Kennecott would send Dunkle to Africa, to look for new mines for possible purchase.

Upon Dunkle's return from a year-long trip in Africa, he left Kennecott to explore other possibilities and was chosen to reopen the Lucky Shot mine on behalf of Pardners Mines of New York.

Having been destroyed by a fire, it had to be rebuilt entirely. Thus, with a new salary and a share of the profits, in the winter of 1930-31, Dunkle reopened the Lucky Shot as the first year of modern operations in the Willow Creek District. His faith in the project was warranted, as the average grade of ore in its first three years of operation was never less than two ounces of gold per ton, a rarely duplicated grade.

Continuing his prospecting career, Dunkle traveled as far north as the Brooks Range and went through a long-time Kennecott friend, Bert Nieding, to examine prospects in southeastern Alaska, all the while his crews drilled placer deposits in the Circle and Yenta mining districts.

In 1936, he began to develop the Golden Zone lode on the south flank of the Alaska Range near Broad Pass.

Areas prospected by Dunkle stretch throughout Alaska and include Chichagof Island, the Brooks Range, the Big Hurrah near Nome and the Golden Zone near Flat.

"His presence as a mining engineer and geologist was especially strong in the Willow Creek district of the Talkeetna Mountains, around Prince William Sound, at Kennicott in the high Wrangell Mountains and at the Golden Zone" in the Alaska Range, Hawley wrote.

Leaving Pardners in 1938, Dunkle and local Alaskans endeavored to keep the Golden Zone going and opened a placer mine at Caribou Creek in Kantishna to support it. Aiming at self-sufficiency, as most of the power needed for the mine was generated by hydroelectric systems of Dunkle's own design, he began to show a growing interest in aviation.

It was this aviation that spurred the story by Hawley, "Alaska's Flying Miner."

"Some of Dunkle's Alaskan hikes of 1912 to 1924 are legendary," Hawley wrote. "In total, he covered many hundreds of miles of extremely rugged Alaskan countryside cut by glaciers and broad silt-rich rivers."

While his on-foot treks across Alaska were legendary, he had higher aspirations – especially after his first flight in 1928 transported him from a Kantishna region mine to Fairbanks in just two hours.

"Gradually the romance or pride that had once attended a 60-mile hike paled, especially when an upward glance showed a possible competitor passing overhead at nearly 100 miles per hour," Hawley wrote.

Shortly after opening Lucky Shot in 1932, Dunkle had already expressed interest in aviation.

With several colleagues, he formed Star Air Service. Eventually, he would become chief shareholder and president of Star Air Airlines, a direct ancestor to a name we all know and love, Alaska Airlines.

Dunkle was a skilled and adventurous pilot who established several records, including the fastest time between Seattle and Anchorage and the successful freight of a bulldozer over the Alaska Range, another first.

At the time, Dunkle was a main mover and shaker behind the plan to connect Lakes Spenard and Hood to provide adequate room for seaplane takeoff and landing at Anchorage. Although, perhaps, the true motivation behind this may have been the fact he had crashed in a Travelaire on an attempted takeoff when the plane hit a tree.

Although Dunkle began his flying instruction in Seattle in the winter of 1931-32, he would not finish before returning to Alaska for the spring season. Rather, he would grubstake his young trainers in an aviation business that started in Anchorage as Star Air Service that would eventually evolve into Alaska Airlines. Thanks in part to Dunkle's patronage, guidance and business from his mining operations, access to the wider world is now possible.

Float plane enthusiasts in Anchorage who currently use Lake Hood can also thank Dunkle, who called himself the instigator of a canal project connecting it with Lake Spenard, creating a seaport in Anchorage "when it was most needed," Hawley wrote.

Nevertheless, like most, hopes, dreams, plans, and life in general, all stopped with World War II.

This would include Dunkle's plans to develop the Golden Zone gold-silver mine about midway between Anchorage and Fairbanks, which was closed by War Production Board Order L-208. As a result, Dunkle turned to mining coal to support the war, shipping bituminous coal to the military bases in Anchorage.

Although Dunkle would champion once again efforts to rekindle Golden Zone immediately after the war, it failed largely due to the economics of the time.

In the late 1940s, a once wealthy Dunkle occasionally worked as a coal miner in his own mine and held on to what was left of his mining empire. Gradually recovering economically, he also briefly worked for the U.S. Army Corps of Engineers before starting his last mining venture.

That venture was a coal field at Broad Pass.

As one of his final projects before his passing, Dunkle would invent a coal drier to upgrade lignitic coal.

This would add to another of the many legacies he would leave for Alaska and miners today.

"He reasoned that reducing the moisture content would increase the thermal value of the coal as well as decrease its shipping cost," Hawley wrote. "The technical part of the problem is fairly difficult. The coal has to be dried but in such a way that its fabric and inherent strength are not destroyed. Once dried, the coal must be treated to stop resorption of equilibrium moisture."

The other problem of treating low-quality coal, which still dogs Alaska coal producers today, is to design a drying process with costs that do not exceed the benefit.

Dunkle's solution was to dry coal under steam pressure, about 100 degrees Centigrade, eliminating about two-thirds of the moisture.

To prevent the dried coal from reabsorbing moisture, Dunkle treated it with fuel oil, which filled the near-surface pores of the coal.

"Oiling also added a small amount to the heat content of the product," Hawley wrote.

Despite this significant contribution to mining, Dunkle would not live to see the fruits of his labor.

According to Hawley's story, Dunkle was fiercely dedicated to his remaining projects in the years just before his death at the age of 70.

As the story goes, on September 29, 1957, he set out on foot from the Alaska Railroad section house at Broad Pass in search of a clear-water spring needed for his self-designed coal improvement plant.

Never returning from that trip, his body was found four days later after "his well-worn heart had finally failed," Hawley wrote.

In the preface, Hawley wrote that during Dunkle's 50-year professional career, he "set a pace in geology and mining that was difficult to follow. The pace accelerated in 1932 after Dunkle earned his pilot's license and he barely slowed down until his death in 1957."

Following Dunkle's passing, his wife Billie pushed ahead with the coal improvement project. Testing in Fairbanks showed that processed Broad Pass lignite could compete against most other coals in the state. She formed and presided over a new company, Accolade Mines, to finance the project and was making marketing progress before her death in April 1962.

However, her labor would ultimately not bear fruit, and the Dunkle mining presence of more than half a century in Alaska finally ceased upon her passing.

Despite this, efforts to advance Golden Zone and Lucky Shot have seen modern reexamination with Avidian Gold Corp. and Contango ORE Inc., respectively, exploring these properties. And, given how Dunkle left this world, it can be surmised he would be glad to see his passions receiving the due diligence they have always deserved. 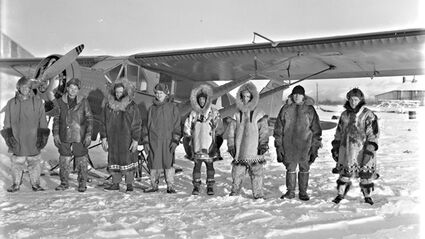