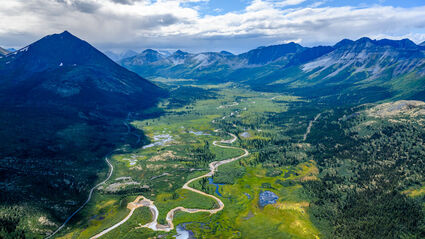 Macmillan Pass lies within the Mackenzie Mountains which form a natural border between the Yukon and NWT, Canada.

Fireweed Metals Corp. Nov. 22 announced that the second hole drilled this year at Macmillan Pass cut an impressive 124 meters averaging 12.3% zinc, 1.3% lead, and 45.9 grams per metric ton silver in the Boundary West zone, the best intercept ever on the company's flagship property in Canada's Yukon.

"The first results from the 2022 program include the best intersection we have ever had at Boundary zone, or anywhere on the property including our Tom and Jason deposits," said Fireweed Metals CEO Brandon Macdonald.

Not only did it return phenomenal results, this step-out hole successfully extended Boundary West massive sulfide mineralization, which remains open in multiple directions, including toward where geological vectors suggest a feeder zone may be present in which higher grades and thicknesses may be found.

The company says that the increase in zinc, lead, and silver grades toward the east and with depth at Boundary West suggests that the feeder structure is located to the east and/or at depth from hole NB22-002, where the massive sulfide zone remains open.

"Boundary West seems to get higher grade the more we chase it to depth, and we see great potential for this massive sulphide zone – it is open along strike on both sides, and at depth, including in the direction toward the potential feeder structure," added Macdonald. 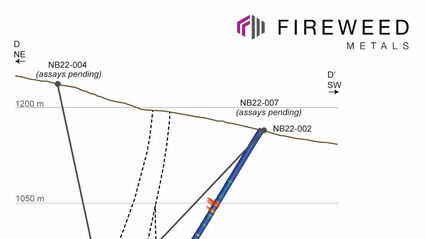 "These are impressive assays to kick off reporting of our 2022 drill results," finished Macdonald.