Life is full of little disappointments

While we are grateful for all that we have during this holiday season, we must not lose sight of all that remains to be done North of 60 Mining News – December 2, 2022 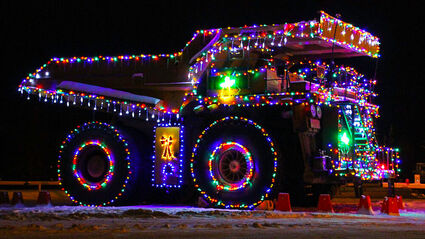 It crosses my mind, however, that the issues that fall off the table, such as ambient carbon dioxide and supporting Ukraine's sovereignty, simply get lost in the plum sauce.

The popular press dictates the news cycle, and there is only a finite number of items that can be squeezed into a 20-minute news hour. The remaining 40 minutes, featuring who should be the next dog catcher or what kind of gizmo the kids need this year under the tree, are the topics that pay the rent.

For me, what is disappointing is not what is said, but what goes unnoticed.

Obviously, it is a frame of reference issue. What may be of interest to me might put someone else to sleep.

For instance, no matter how hard the Alaska mining industry blows its horn, if the industry's issues don't get traction with the powers that be, it is simply background noise.

Case in point – a lot of the predominant issues du jour are based on the availability of high-tech toys and tools. From voting machines to video games, the wonderful world of high-tech is in our faces. Yet there is no concomitant aegis mentioning how those tech products get to our hands, or even whence they are sourced.

Looking at the world through the wrong end of the telescope, as I often do, it appears to me that Shane Lasley's several articles in Mining News North of 60 – describing how 49 of the fifty minerals regarded as critical to the health and safety of America and Americans – illustrate what can and should be recovered in Alaska, yet these minerals largely remain unmined.

In order for us to have the products we want and deserve, we have to mine the minerals that make such things work.

The arguments are shopworn. Alaska is America's treasure chest. Efforts in virtually every direction encourage our students and our politicians to take the steps that they can and to do the things that they must to make the system work just are not enough.

Our Native Corporations, which stand to enjoy the greatest benefit from world-class mines being developed on their lands, need to take the lead and show the way. Many of their ANCSA selections were specifically premised on exploiting the contained mineral resources.

Our governor has repeatedly declared that Alaska is open for business, but down in the trenches, resistance by the federal government seems to be more than even the State can overcome.

It is difficult to fathom the objections of those organized to oppose mining. The Alaska experience, if nothing else, demonstrates that mining operations are invariably out of sight, environmentally sensitive, and transient.

The Red Dog mine, ironically the worst "polluter" on the toxic release inventory, is clean and safe. The so-called toxins are the rocks that they relocate at the mine without any ill effects. Reclaimed areas from Usibelli to Valdez Creek are invisible, and relics from legacy mines are often memorialized or lost to nature.

With very few exceptions, even legacy mines in Alaska are not associated with significant negative consequences.

What is the issue then?

Nationally, the mining industry bears scars from historic wounds, but they are curable with modern technology. Even mining opponents have a hard time marshaling opposition to specific projects based upon allegations of historic environmental damage.

Generally, mines are located in remote locations, so they are invisible to passers-by.

I have long felt that the mining industry needs a champion. Someone, somewhere, who somehow can lead the way out of the mud of misinformation and advocate for the development of our resources domestically.

In the current political climate, we certainly cannot count on our politicians.

The prognosis for the mining industry in Alaska is one of life's little disappointments, if only because the same old people will be hiding behind the same old roadblocks with the same old results.

Mining nationally, and in Alaska, has earned the right to a better result.

We have the resources, and we have the tools. We simply need a champion.