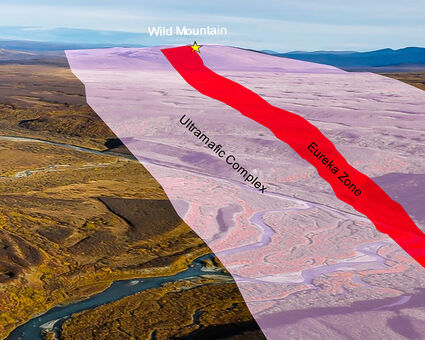 Millrock has identified a roughly 1,200-by-400-by-300-meter zone of nickel-copper-cobalt-PGM mineralization at Eureka.

The largest of these programs was carried out by Felix Gold Corp. on the Treasure Creek property in the Fairbanks District, a region that has produced more than 8 million ounces of placer gold and is home to Kinross Gold Corp.'s Fort Knox Mine, which has produced nearly 9 million oz of hardrock gold.

As a private company, Felix entered into a strategic alliance with Millrock Resources Inc. in 2021 on several Interior Alaska gold exploration projects – Treasure Creek and Ester Dome near the city of Fairbanks, plus the Liberty Bell project about 70 miles to the southwest.

Millrock transferred these properties to Felix in exchange for nearly 10 million shares of the exploration company that listed on the Australian Stock Exchange early in 2022.

Since its deal with Millrock, Felix has expanded its land position to roughly 151 square miles (392 square kilometers) in the Fairbanks District.

During the 2022 season, Felix carried out more than 17,000 meters of reverse circulation drilling that cut broad sections of near-surface gold mineralization at Treasure Creek in preparation for a diamond drilling program slated for 2023.

"Felix Gold executed an excellent drilling program this year and we look forward to seeing the results," said Millrock Resources President and CEO Gregory Beischer. "We think the potential of the Fairbanks District has not been fully recognized, but that it soon will be."

In the Goodpaster District, Resolution Minerals Ltd. carried out a five-hole drill program at the Tourmaline Ridge prospect on the West Pogo Block of the roughly 106,250-acre 64North gold project.

While its Australian partners were drilling in the Fairbanks and Goodpaster districts, Millrock carried out its own investigation of the Nikolai nickel-copper-cobalt-platinum group metal project about 80 miles south of Delta Junction, Alaska.

Early in 2022, Millrock staked 104 state mining claims covering Eureka Zone and entered into an option agreement for Canwell, a block of 42 state mining claims about 11 miles (18 kilometers) to the northeast, where historical surface rock sampling and drilling has identified higher-grade nickel, copper, and PGEs.

Based on historical drill results, Millrock has identified a roughly 1,200-by-400-by-300-meter body of mineralization at Eureka that contains low-grade but potentially economic concentrations of nickel, copper, cobalt, platinum, palladium, and gold.

Upon further review of historical core stored at the Geologic Materials Center in Anchorage, Alaska, Millrock geologists noticed incomplete and discontinuous sampling of core from below CEZ in FL-003, a hole drilled by INCO in 1997. 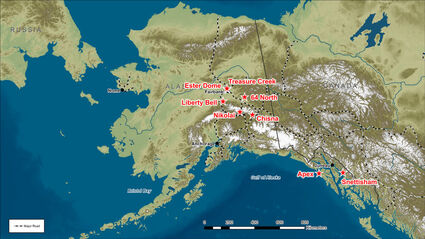 Based on the newly received results, along with historical assays, Millrock now interprets there is a Lower Eureka Zone below the previously identified CEZ.

"From historical drilling, it is clear that a large volume of mineralized rock is present in the Eureka Zone," said Beischer. "We believe the demand for nickel, cobalt, and other Critical and Strategic Metals will be exceptionally strong in the coming decades, making low-grade mineralization such as at Eureka of interest."