Return to Round Top 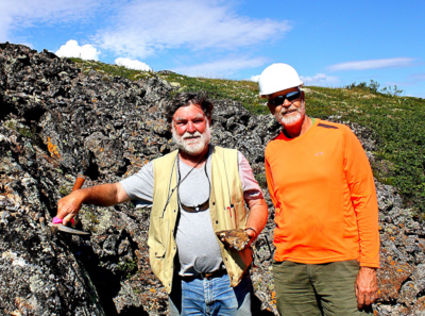 ILLINOIS CREEK CAMP: Maps spread out here on a pool table and laptops filled with geophysical and geochemical data collected at the Round Top copper project line up on a makeshift desk against the wall – an air of optimism and excitement fills the former recreation room for the past-producing Illinois Creek Mine that now serves as the headquarters for Western Alaska Copper & Gold Company.

The source of the excitement is a drill tapping into a potentially large and robust porphyry copper deposit about 11 miles to the northeast, the first such program carried out at Round Top in 34 years.

"Our 2016 drilling program represents a significant milestone in the exploration of the Illinois Creek district," said Kit Marrs, founder and president of Western Alaska Copper & Gold.

It also marks a pivotal moment for the privately held exploration company funded by its four directors and a small circle of friends and associates.

With money out of their own pockets on the line, three of the company's four directors – Marrs, his wife Joan and Gary Jones – are closely monitoring the drilling progress and carefully targeting each hole to corroborate results from historical drilling and test some of the quality geophysical and geochemical anomalies that define this large porphyry target.

Considering the chalcocite and other copper mineralization being cut by drilling so far, this careful deliberation is paying off.

Kit and Joan Marrs were first dispatched to Illinois Creek, a western Alaska district located a few miles east of the Yukon River, after Anaconda Minerals discovered outcropping copper mineralization during a 1980 reconnaissance exploration program in the area.

As project geologist for Anaconda, Kit was in charge of the 1980s exploration program that included mapping, sampling, geophysical surveys and drilling.

This early work made a number of discoveries across the district that includes a nearly mile-wide intrusive complex at Round Top; TG and TG North, high-grade brecciated silver-gold-lead-zinc vein prospects less than a mile northwest of Round Top; Honker, a high-grade gold prospect on separate group of claims about 13 miles to the west; and the Illinois Creek copper-silver deposit, situated about six miles south of Honker.

While the Illinois Creek property was eventually developed into a mine that produced roughly 130,000 ounces of gold and 500,000 oz. of silver from 1997 until 2003, the other prospects Anaconda discovered before closing its doors in 1985 went largely unnoticed.

This lack of notice worked out well for Kit and Joan, who were able to nab full and unencumbered ownership of the mineral rights to Round Top, TG and Honker by simply staking state of Alaska mining claims over the prospects in 2008.

In order to get Western Copper & Gold up and running, Kit and Joan invited Greg Anderson, a business partner in Tucson with a legal background, and Jones, to join them as directors in 2010.

Since securing the properties, the Western Alaska Copper & Gold team has steadily been building towards the drill program being carried out this summer. This work has included compiling all the historical data from Anaconda's tenure; purchasing key heavy equipment and the Illinois Creek camp from Novagold Resources; conducting extensive modern geophysical surveys at both the Round Top and Honker properties; grid soil sampling at Round Top; rock and trench sampling at Honker; and integrating all of the historical and modern results in a database now being used to guide this year's drilling.

Jones brings strong management experience and geophysical expertise to the Western Copper & Gold team. This director, who has a bachelor's degree in geological engineering and a master's in geophysics, has served as president of both Western Geophysical and WesternGeco, the seismic division of Schlumberger. This global geophysical experience has provided the company with data from the various surveys Western Alaska Copper and Gold has carried out at Round Top and Honker, as well as the historic geophysics that was reprocessed by Zonge Engineering.

The outcome of this work identified a number of drill targets that includes a number of strong induced polarization-resistivity and significant aeromagnetic anomalies high-low pairs within a larger aeromagnetic high identified by high-resolution mapping completed in 2012.

One set of high-low-high anomalies situated on the south flank of the known porphyry mineralization at Round Top was of such magnitude that Precision GeoSurveys suspected it must have had an instrument malfunction. A second flight over this area, however, returned the same strong response.

Jones said this promising target will be drilled in the future.

Now, the Western Alaska Copper and Gold team has launched a roughly 1,500-meter drill program that aims to prove that the extensive copper and other metal anomalies found on the surface and coincident with a 4,000- by 5,000-meter geophysical anomalies are expressions of a large and copper-rich porphyry system, with outlying epithermal gold, silver, lead and zinc targets.

Anaconda proved that porphyry material enriched with copper, molybdenum and silver was present during a seven-hole drill program completed at Round Top in 1981. While Marrs has the assays and cross sections from this historical drilling, the core was lost, making drilling in the area of some of the better historical holes a logical place to start.

With a track-mounted drill leased from Stewart, B. C.-based More Core Drilling, crews are able to drive between drill sites at Round Top, saving time and expense compared with moving the rig with a helicopter.

Jones told Mining News that More Core is the "best drilling company either Kit or I have been associated with."

While it will still be a month or two before assay results from this year's program are known, copper mineralization was observed in RT-9 core and the hole tapped roughly nine meters of massive sulfide mineralization in a skarn contact zone.

Due to its orientation, hole 10 was not expected to return such a long mineralized intercept as the historic hole. However, once the drill bit emerged from a nearly parallel fault, it cut into the copper mineralization in porphyry that Western Alaska Copper & Gold was seeking.

Following the success of hole 10, the track-mounted rig carrying out the efficient drill program was driven about 220 meters south to test one of several intriguingly strong IP anomalies within a resistivity low.

RT-13 will be collared north of RT-3, an Anaconda hole about 200 meters north of RT-7 that cut three mineralized intercepts, including 62.7 meters averaging 0.36 percent copper and 0.015 percent molybdenum. Likely the last hole of the 2016 program, hole 13 will target an IP anomaly coincident with a resistivity low that is expected to be associated with copper mineralization cut at the bottom of hole 10.

Ultimately, Western Alaska Copper & Gold hopes its work at Round Top will attract a major mining company that will further define and potentially develop this copper project. Any such company, however, will need significant infrastructure to transport equipment and fuel to the western Alaska project and, hopefully, copper and molybdenum concentrates to world markets.

Luckily, Round Top already enjoys the convenience of a 4,400-foot Alaska-owned airstrip at its camp capable of landing a DC-6 and an established 26.5-mile winter trail linking the Illinois Creek camp to the Yukon River.

In 1995 the Alaska Industrial and Economic Development Authority published a prefeasibility study for building an industrial grade road along this route and a port on the Yukon River. From here, the Yukon River serves as a super highway to the Pacific Ocean.

This infrastructure also could serve the future development of other projects being explored in the Illinois Creek district, including the company's TG high-grade lead-zinc-silver-gold carbonate replacement prospects and the high-grade gold prospect at Honker.

"The logistics of using the Yukon River for barge transport of the fuel and heavy equipment needed to develop the district and ultimately to move concentrate out, represents a low-cost mode of transportation," Marrs commented on the significance of the project's accessibility.

"This river transportation will substantially help the competitiveness of these deposits when competing with long overland infrastructure requirements of other potential mines," he added. "Success by Western Alaska Copper & Gold will bode well for jump-starting the economic development of this stretch of western Alaska." 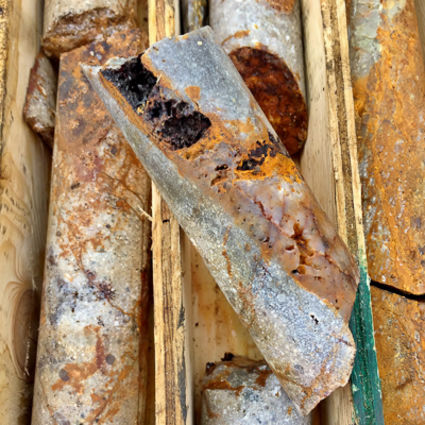 This core from about 67 meters down RT-12, the fourth hole of Western Alaska Copper & Gold's 2016 program at Round Top, shows strong oxidation of a large sulfide vein.