Mining Explorers 2016: The alchemy of turning paper to gold 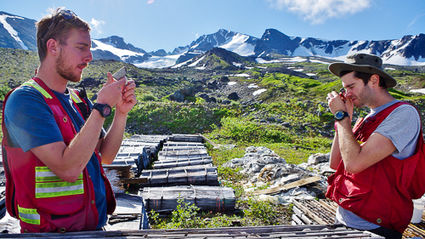 Seabridge Gold Inc. has a straightforward strategy for exploring its projects in British Columbia and Northwest Territories – transform paper currency into gold.

"At Seabridge, we like to think of ourselves as modern alchemists – turning cash into gold," Seabridge Chairman and CEO Rudi Fronk explained during an August interview with The Gold Report. "Over the (p)ast 17 years, we have used cash from our shareholders to fund acquisitions and exploration of gold projects in Canada with the aim of increasing gold ownership per share as measured by our ounces of gold resources and reserves in the ground relative to our shares outstanding."

With 60.1 million ounces of gold – along with 253.2 million oz. silver, 13.63 billion pounds of copper and 285 million lbs. of molybdenum – in measured and indicated resources, this strategy seems to be paying off for Seabridge and its shareholders.

The lion's share of the cash-turned-to-gold is located in a series of porphyry zones found at the KSM gold-copper project in northwestern British Columbia.

These reserves support a 53-year mine that would average 540,000 oz. of gold, 156 million lbs. of copper, 2.2 million oz. of silver, and 1.2 million lbs. of molybdenum annually, according to a prefeasibility study published in September.

While this already would make KSM a long-lived world-class mine, the project encompasses nearly as much gold in resources not included in the mine-plan as are in the reserves.

Much of this added resource is found in Deep Kerr and Iron Cap Lower, two zones discovered after completion of the PFS.

"In the three years since its discovery, Deep Kerr has taken its place among the world's largest gold-copper deposits," explained Fronk. "The shape of the deposit continues to support cost-effective block-cave underground mining methods and the updated resource estimate has been carefully constrained by this mining method."

This year, the company carried out a roughly 10,000-meter drill program designed to expand the block cave shapes that confine the Deep Kerr resource by as much as 800 meters, which could increase the mining rate from this higher grade deposit.

With grades consistent with the inferred resource, these holes are expected to expand the known resource in the shape and orientation required to optimize the proposed block cave mine plan for Deep Kerr.

"This year's drill program has been carefully designed to expand and optimize the prospective mine plan at Deep Kerr and thereby improve the KSM project's potential economics," said Fronk. "Overall, Deep Kerr is once again demonstrating that it has very few equals for size and grade."

An updated PFS that restates the mineral resources for all of the zones at KSM by employing both open-pit and block-cave mining methods is slated for completion this year.

Additionally, the study will incorporate a preliminary economic assessment that considers the inclusion of the Deep Kerr and Lower Iron Cap zones into KSM mine sequencing.

Iskut, a property about 30 kilometers (19 miles) northwest of KSM, is another place Seabridge believes it can employ its alchemistic strategy of transforming cash into gold.

The company got its hands on the 286-square-kilometer (110 square miles) Iskut gold-silver property by acquiring the property's owner, SnipGold Corp. in an all-share deal that closed in June.

To complete the buyout, Seabridge issued 695,277 shares, at an exchange ratio of one Seabridge share for 63 outstanding SnipGold shares.

Prior to launching a 3,000-meter drill program at Iskut, Seabridge set out to clean up historical mine areas on the property, especially surrounding the past-producing Johnny Mountain Mine. This proactive remediation further bolstered an excellent working relationship between Seabridge and the Tahltan Central Government, the administrative governing body of the Tahltan First Nations.

"We have a strong interest in the remediation of the Johnny Mountain mine site on our traditional territory," explained TCG President Chad Day. "We expect to work closely with Seabridge to ensure that Tahltan citizens benefit from this work and that we are kept fully informed of the progress that is being made in the planned clean-up programs."

Iskut hosts two historical high-grade mines – Snip and Johnny Mountain – that were in operation for stints from 1988 to 1999.

The Snip Mine is reported to have produced 1 million oz. of gold from ore with a recoverable grade of 24.5 g/t gold during the 1990s.

While gaining a better understanding of this KSM-like deposit is of interest to Seabridge, the primary objective of the C$3 million program carried out in 2016 is to investigate Iskut's high-grade potential.

"In our view, Iskut could host extensive district-scale porphyry-style mineral systems similar to our nearby KSM project. These systems would account for the Iskut property's numerous gold and copper mineral occurrences. However, at Iskut, unlike at KSM, these systems appear to be largely intact from top to bottom, not eroded or faulted away. If so, this would mean that the epithermal tops of the porphyry systems, which typically host high-grade precious metals, could remain intact near surface," Fronk said. "These are the kinds of occurrences we are targeting."

High-grade gold targets around the Johnny Mountain Mine seem to be of particular interest to Seabridge.

Considerable historical data compiled by previous owners and re-interpreted by Seabridge's exploration team formed the basis for a 3,000-meter drill program that was launched at Iskut in August.

To further inform the program, Seabridge crews re-logged and sampled old drill core, much of which had not been previously analyzed. A magnetotelluric geophysical program to identify altered structures and extensive hydrothermal alteration associated with mineralization in the target areas is also underway.

The company said the results from this year's work will be used to design a much larger program for 2017.

With 6.5 million oz. of gold in 91 million metric tons averaging 2.2 g/t gold, Seabridge's Courageous Lake project in Northwest Territories is second only to KSM in terms of undeveloped gold reserves in Canada.

In 2012, Seabridge published a prefeasibility study for Courageous Lake that detailed a mine that would produce an average of 385,000 ounces of gold annually at cash operating costs of $780 per ounce and a mine-life of 15 years.

The reserves that support the PFS represent only about two kilometers (1.25 miles) of a 53-kilometer (33 miles) greenstone belt blanketed with mining claims and leases owned by Seabridge.

With KSM, and now Iskut, as the best options to turn cash into gold, Seabridge has not completed any additional significant exploration at Courageous Lake over the past couple of years.