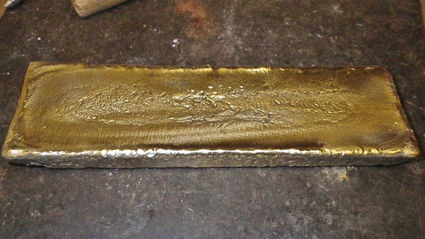 This bar contains 81.4 oz of gold recovered from processing 88 tons of bulk sample material from the Ace of Spades vein at the Golden Predator's 3 Aces project in eastern Yukon.

Golden Predator Mining Corp. May 3 said it is doubling the 2017 drill program at its 3 Aces gold project in southeast Yukon to 40,000 meters.

Since the February start of the program, 6,900 meters of reverse circulation drilling has been completed at the Spades zone.

This work has tested the depth and strike extensions of the high-grade gold found at the Ace of Spades vein, deeper stockwork mi...