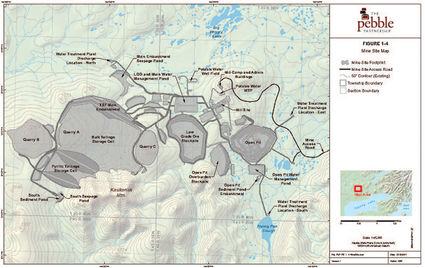 Proposed infrastructure at the Pebble Mine project.

The permitting process for the world-class Pebble copper-gold-molybdenum mine in Southwest Alaska is officially underway. With this monumental milestone comes the first real look at the new Pebble Mine plan, an engineering feat that the Pebble Partnership believes strikes a balance between environmental footprint and sound economics.

"There is a sweet spot in which you can drive down the footprint size and still reach a rate-of-return that makes sense," Pebble Partnership CEO Tom Collier told Mining News.

With the U.S. Army Corps of Engineers' Jan. 5 acceptance of Pebble Limited Partnership's application to permit an environmentally optimized mining operation at Pebble, the environmental side of the scale will be vetted with an environmental impact statement level of analysis under the National Environmental Policy Act, or NEPA, process.

"We are pleased by the expediency with which permitting for the Pebble Project has been initiated, and that the Corps will serve as the lead federal agency for the rigorous, objective, transparent and science-based EIS process," said Ron Thiessen, CEO Northern Dynasty Minerals Ltd., currently the sole owner of the Pebble Partnership.

First Quantum Minerals Ltd., a global mining company that has the option to acquire a 50 percent interest in the Pebble Partnership for US$1.5 billion, has arranged to provide funds for permitting Pebble.

"This is indeed an investment in the long-term future of our company and it is sustainable growth through the next decade," First Quantum President and CEO Philip Pascall said, during a presentation on a framework agreement struck with Northern Dynasty.

Pascall said First Quantum has confidence that the project being analyzed by the Army Corps of Engineers, the lead agency for the NEPA process, will demonstrate that a mine at Pebble can be developed in an environmentally sound manner.

"It is our belief that the Army Corp's findings will provide an important, objective and scientific validation that Pebble can be developed to meet the rigorous environmental standards enforced in the United States and Alaska," he said.

Expected to produce some 5.74 billion pounds of copper, 6.4 million ounces of gold, 32 million oz of silver and 260 million lb of molybdenum over a 20-year mine life, the environmentally optimized Pebble Mine still has the capacity to be economically sound.

Pebble Partnership believes its engineers have put forward a project that has found the sweet spot that balances the environmental considerations of developing a mine in an area of Alaska renowned for its world-class salmon fishery and the economics of developing an equally outstanding deposit of copper.

Collier said the key to finding this balance was to address the primary concern of the U.S. Environmental Protection Agency and opponents of the Pebble project – size.

"What really needed to be brought to this game is a really serious focus on footprint reduction," he said.

With this as its guiding principal, the Pebble team came up with a mine plan that reduces the environmental footprint to a size in the ballpark of what EPA said would be acceptable to develop in its Bristol Bay Watershed Assessment, but with an ore processing rate nearly five times what the agency considered possible for a mine of that size.

One of the keys to reducing the footprint while still having an ability to produce copper at a rate that is economically feasible is the new Pebble Mine plan focuses on a portion of the deposit that comes right to the surface.

"One of the major things we did here was to move where we are going to focus on the pit to a place where there was minimal overburden," Collier said.

By doing so, the overburden-to-ore ratio over a 20-year mine-life is an amazingly low 0.1-to-1.

This nominal strip-ratio, coupled with the usage of much of the overburden material to build tailings storage embankments and other needed on-site infrastructure, means there is very little waste material that needs to be stored.

"Once that strip-ratio changes, and you don't need places to stack waste rock, it makes a big difference," Collier added.

Among the big differences is the ability to address another major stakeholder concern – keeping the mining infrastructure out of the Upper Talarik Creek drainage, which is noted for its salmon habitat.

The Pebble team has made significant changes both inside and outside of the smaller footprint that further reduces the environmental impact and perceived risks of developing a mine at the copper-gold-silver-molybdenum project.

One of the biggest of these decisions is not to use cyanide extraction to maximize gold recoveries, therefore sacrificing a bit of the yellow metal to alleviate some worries.

While the mining industry safely uses cyanide to extract gold all around the world, Collier said that not bringing the chemical to Pebble eliminates the perceived risks many associate with this compound.

"That is a pretty big commitment that we made and another one our team is proud of," Collier said.

Another commitment is to store the potentially acid generating (PAG) tailings in a lined facility, a storage area that costs more to construct but adds an extra layer of protection.

To be built at the upper end of the larger bulk tailings facility, which stores the more benign crushed rock processed through the mill, the PAG facility has a redundant level of safety.

With over capacity water treatment facilities built into the mine plan and specialized design, both the PAG and non-PAG facilities will only store tailings and not excess water.

The water that is captured on-site will be treated and conditioned before being discharged at three locations. Considering the natural water balance, the discharge water from the site would be optimized in consideration of downstream fish habitat.

"These are very substantial improvements that we have made over the past few years in response to issues and concerns raised by project stakeholders," Collier said.

While the economics of the project will not be known until Northern Dynasty completes an updated technical report, expected later this year, the 287 million lb copper, 321,000 oz gold and 1.6 million oz silver and 13 million lb of molybdenum of average annual production expected from the proposed Pebble Mine would be valued at roughly US$1.5 billion at today's prices.

A mine with this level of metals output, which is roughly on-par with the value of the annual production at the proposed Donlin Gold Mine project, would be a major economic generator for the Bristol Bay region and Alaska as a whole.

"With the growing worldwide consumption and dependence upon technical products powered by critical minerals such as copper, the expanding demand for renewable energy technologies, and the development of projects with strategic national significance, the Pebble deposit has the potential to generate hundreds of millions in annual economic activity for Alaska, as well as significant revenues for state and local governments," the Pebble Partnership wrote.

One of the largest contributions the project will provide to the local and state economies is in the form of wages to roughly 2,000 workers needed to build the mine and some 850 miners during the 20 years of operations.

With the average annual salary for Alaska mine workers topping US$100,000, roughly US$200 million in wages would be paid each year the mine is being developed and some US$85 million a year during operations.

Located on state mining claims, any mine developed at Pebble would be a significant contributor to Alaska coffers.

Above the mining license and corporate taxes paid by all mines in the state, Alaska would receive royalty payments from the metals produced from the world-class Pebble deposit.

Closer to the proposed mine, the Lake and Peninsula Borough, which covers the area where Pebble is located, would benefit from a major new source of tax revenue.

The Pebble Partnership is also working out the details of a profit sharing program that will give Bristol Bay residents and Alaska Native Village corporations in the region an ownership interest in any mine that is developed at Pebble.

While the project's staunchest critics may never be swayed, the Pebble Partnership is convinced that the Pebble Mine project that it has submitted for permitting has found that sweet spot that provides maximum environmental protections while still being financially robust enough to make sense.

"We believe that as Alaskans become more familiar with our proposed project design and the environmental safeguards it incorporates, there will an increasing degree of support for the project, and the significant economic potential it represents for the state of Alaska," said Collier.