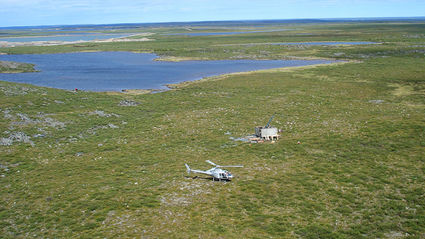 A C$8.5 million exploration program carried out in 2012 turned up the Walsh Lake gold deposit on the Courageous Lake property in Northwest Territories.

Seabridge Gold Corp. Jan. 8 reported plans for a 36-hole drill at its Courageous Lake gold project in Northwest Territories. The planned 7,200-meter program, which is slated to begin in February, will test seven targets along a geophysical and stratigraphic break that hosts the Walsh Lake deposit.

In 2012, Seabridge published a prefeasibility study for Courageous Lake that detailed a mine that would produce an average of 385,000 ounces of gold annually at cash operating costs of US$780 per ounce and a mine-life of 15 years.

The reserves that support the PFS represent only about two kilometers (1.25 miles) of a 53-kilometer (33 miles) greenstone belt blanketed with mining claims and leases owned by Seabridge.

A C$8.5 million exploration program seeking another deposit along the greenstone belt turned up Walsh Lake in 2012. Early in 2014, the company announced 4.62 million metric tons of inferred resource averaging 3.24 g/t (482,000 oz) gold for this discovery.

Metallurgical testing indicates that the Walsh Lake material is free milling with cyanide recoveries as high as 95 percent. Given the easier recovery of this material, the Walsh Lake deposit could be mined prior to building the processing plant required to recover the gold from the FAT deposit. Seabridge said this order of development could have significant economic benefits for the Courageous Lake project not only by extending mine life but also by generating cash flow to pay for some capital costs as the FAT deposit ramps up.

"Our aim is to find more Walsh Lake-style deposits which could be added to the front end of a revised mine plan at the Courageous Lake Project where they have the potential to make a significant economic impact," said Seabridge Chairman and CEO Rudi Fronk. "We have a lot of confidence in this program which we have been planning for several years, but spectacular results at KSM kept pushing it back in the queue."

Located about 10 kilometers (six miles) south of the FAT deposit, the Walsh Lake resource appears to be the southern extension of the historical Tundra Mine, a high-grade gold producer that was shuttered in 1999 due to low gold prices.

Well-developed and laterally continuous structural zones are found stratigraphically above and below the extension of the Tundra Mine zone and it is these features that host multiple gold-bearing zones at Walsh Lake. Geophysics, mapping and drilling have traced these structural zones about 5,000 meters north of Walsh Lake toward the FAT deposit and about 3,000 meters to the south.

Seabridge said the initial drilling carried out this year aims to determine which targets are gold-bearing, within 200 meters of the surface, and have strike and width continuity.

If the drilling turns up zones that meet these criteria, the company expects to proceed with infill drilling to support a resource estimate.