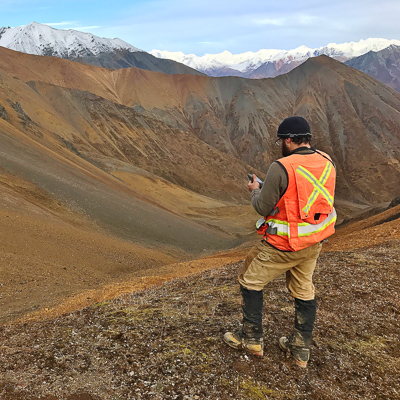 PolarX Ltd. Jan. 31 announced that it has staked 34 state mining claims to cover potential extensions of copper mineralization at its Alaska Range project.

The Senator copper prospect on the Caribou Dome side of the Alaska Range project was discovered through a soil sampling program carried out in 2016. This work outlined a roughly 5,000- by 2,500-meter area toward the northeastern end of Caribou Dome with elevated copper in soils and sporadic outcrop.

Australia-based PolarX said recent visits have identified intense iron alteration and the presence of copper oxides on fracture surfaces, discoveries that show the potential of this underexplored area.

A block of 11 new mining claims were staked to cover ground south‐east of the copper anomalism.

Mars, situated about four miles northeast of Senator, is copper-gold porphyry prospect on the Stellar property. Broadly spaced sampling at Mars has outlined copper, gold molybdenum and silver mineralization over a 2,000- by 1,500-meter area. Rock-chip samples collected here have returned up to 7.4 percent copper and 1.8 grams per metric ton gold.

PolarX said an induced polarization geophysical survey completed in 2017 identified a chargeability anomaly that is 100 to 150 meters below the mineralization identified on surface. The company said the coincident geochemical and geophysical anomalies is consistent with a buried porphyry copper-gold system.

Mars lies roughly four miles west of the high‐grade Zackly copper-gold deposit, where 2017 drilling confirmed the presence of thick zones of mineralization and indicates the presence of an underlying porphyry intrusion. PolarX said the geological evidence supports a west-northwest structural corridor extending between Mars and Zackly that may host multiple buried porphyry copper-gold systems. The company staked 21 claims in two blocks to cover extensions to both ends of this corridor.

In addition to the claims immediately adjacent to Alaska Range, PolarX staked two claims at Lyken, a vegetation anomaly that indicates the potential of copper sulfide mineralization roughly 30 miles east of the project.

Final assays from the 2017 drilling program at Stellar and a resource estimate for the Zackly copper-gold deposit are expected to be released by PolarX soon.