Fort Knox heaps on another milestone 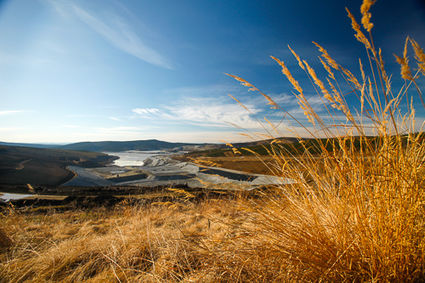 A view from above the Walter Creek Heap Leach, a facility at Kinross Gold's Fort Knox Mine that has produced more than 1 million oz of gold since put into operation in 2009.

The 1-millionth ounce of gold was poured from the Walter Creek Arctic Heap Leach facility at Kinross Gold Corp.'s Fort Knox Mine in Interior Alaska on Jan. 24.

"This is a great milestone for Fort Knox and has been an instrumental part of extending the life of the property. I see our Arctic Heap Leach as a testament to our commitment to innovation as a company," said Fort Knox General Manager Eric Hill. "My thanks goes out to the many folks that have helped achieve this milestone."

The ability to economically recover gold from lower grade ore by processing it on the heap leach pad has been a vital component to keeping this Fairbanks-area mine in operation well into its golden years.

Since its start-up in 2009, the heap leach pad has contributed an average of nearly 125,000 oz per year to Fort Knox gold production, not bad considering that this technology works better in warmer climates.

"Safely producing one million ounces of heap leach gold, over the course of eight years, and in a most challenging environment is not only a monumental event but a testament to the character of everyone at Fort Knox who made it possible," said Steve McKelvey, ore processing manager, Fort Knox Mine.

In fact, this technology has proven so successful, that Kinross is considering building a second heap leach facility as it contemplates mining the 2.4 million ounces of gold outlined on its newly acquired Gilmore land, immediately west of the Fort Knox pit.

When Kinross opened the Fort Knox Mine in 1996, the deposit there had 4.1 million oz of gold in reserves, which was enough to last about eight years. Going into 2018, its 22nd year of operation, the mine continued to boast 1.25 million oz of reserves.

These reserves are expected to increase dramatically this year.

"Gilmore is the newest addition to our development pipeline and represents a promising opportunity to extend mine life at Fort Knox," said Kinross Gold CEO Paul Rollinson. "We have more than doubled M&I resources as a result of gaining the mineral rights to the land adjacent to Fort Knox."

Before resources can be elevated to reserves, however, one must show that mining the resource is economically viable – such a conversion is expected to happen once the feasibility study is completed for the Fort Knox Gilmore project.

"Gilmore is another example of our strategy of pursuing low-risk, high-potential brownfield projects that can contribute to the long-term future of the company," said Rollinson.

As Kinross studies the feasibility of westward expansion at Fort Knox, the Toronto-based miner has added reserves to the east side of the open-pit that will help keep the operation going in the meantime.

Drilling had recently encountered minable gold in the East and South Wall regions of Fort Knox, including 35 meters averaging 0.9 grams per metric ton gold; 13.7 meters of 1.7 g/t gold; and 24.4 meters of 1.8 g/t gold. 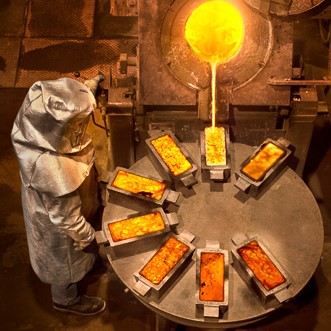 According to Kinross' year-end resource calculation, Kinross converted 254,000 oz of gold resources along the east side of the pit to reserves, this helps offset nearly half of the 515,000 oz mined from reserves last year.

Fort Knox attributes this lower production to less material stacked on the heap leach pad last year, a deficit that was partially offset by an increase in mill grade.

Kinross is looking for Fort Knox to perform well in 2018.

With the addition of Gilmore, it seems likely we will see a few more years of solid performance from Fort Knox, as the Interior Alaska mine continues to churn out more than 1,000 oz of gold per day from the expanded open-pit.