UK-based Pembridge to buy Minto Mine 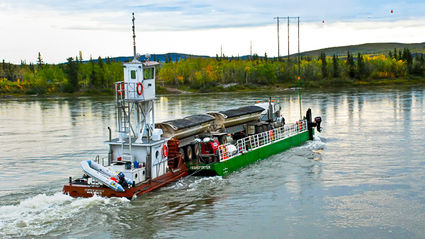 A truck loaded with copper concentrates from the Minto Mine is barged across the Yukon River in transit to Skagway, Alaska.

Capstone Mining Corp. Feb. 14 announced that it is selling its Minto copper mine in the Yukon to Great Britain-based Pembridge Resources plc.

Under the terms of the definitive share purchase agreement, Capstone will receive US$37.5 million in cash, plus working capital adjustments, and common shares representing 9.9 percent of the issued and outstanding shares of Pembridge upon completion of the transaction.

"The divestiture of Minto will allow us to focus our resources on opportunities that will have a more meaningful impact on the long-term growth of the company," said Capstone President and CEO Darren Pylot. "Minto has been an important part of the development of Capstone and we are optimistic for the future of Minto under Pembridge's stewardship."

"Minto fits perfectly with the company's stated goal to acquire a producing and profitable mining operation to which our team can add further value," said Pembridge CEO David Linsley. "This acquisition will represent a core asset to Pembridge and will be used as a platform for future growth."

Pembridge said its management has identified a number of potential operating efficiencies that it believes could significantly lower operating costs.

Currently, all silver ounces and up to 30,000 ounces of gold production per annum is subject to a precious metal purchase agreement with Wheaton Precious Metals Corp.

The existing Minto mine plan, prepared by Capstone, contemplates the continuation of operations through to mid-2021. This is based on the mining of certain of the open-pit and underground deposits comprising a portion of the existing resource base.

Between 2008 and 2012, Capstone invested roughly US$24 million in exploration at Minto and has added more than 500,000 metric tons of copper to the resource base at this Yukon operation. No exploration activities have been undertaken on the property since. Pembridge said a number of prospective exploration targets have been identified and will require drilling.

Immediately following the completion of the proposed acquisition, Pembridge management will implement a number of strategies aimed at significantly extending the current four-year mine plan.

"We believe Minto is an exceptional opportunity with the potential to benefit not only our shareholders but also the local and wider community for many years to come," said Linsley. "We look forward to engaging with and working closely alongside the Selkirk First Nation, the various local communities, the Yukon Government and the substantial workforce at the mine. "

The transaction is expected to close in the second quarter of 2018.