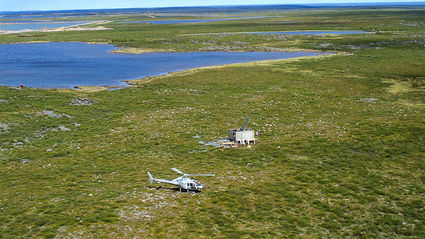 Drilling in 2012 and 2013 outlined 482,000 ounces of gold in a near surface deposit at Walsh Lake on the Courageous Lake property in Northwest Territories.

Seabridge Gold Inc. Feb. 20 reported the start of a planned 7,200-meter drill program at its Courageous Lake gold project in Northwest Territories. This 36-hole program will test seven separate targets along a geophysical and stratigraphic break that hosts the Walsh Lake deposit, discovered by Seabridge in 2012.

The Walsh Lake deposit, which is located about 10 kilometers (six miles) south of FAT, was discovered as part of a campaign designed to extend the Courageous Lake Project's mine life, thereby improving capital efficiency for this remote project.

Drilling in 2012 and 2013 outlined 4.26 million metric tons of near surface inferred resource at Walsh Lake averaging 3.24 g/t (482,000 oz) gold. Subsequent metallurgical testing demonstrated that the material is free milling with cyanide recoveries as high as 95 percent.

Based on these factors, Seabridge is encouraged that the Walsh Lake deposit could be mined prior to constructing the processing plant required for the larger, refractory FAT deposit. This order of development could have significant economic benefits for the Courageous Lake project not only by extending mine life but also by generating cash flow to pay for some capital costs as the FAT deposit ramps up.

"More Walsh Lake-style deposits added to the front end of the FAT Deposit revised mine plan could have a significant positive economic impact," said Seabridge Chairman and CEO Rudi Fronk.

Seabridge said the Walsh Lake deposit appears to be the southern extension of the historical Tundra Mine, a high-grade gold producer that was shuttered in 1999 due to low gold prices. The company says well-developed and laterally continuous structural zones are found stratigraphically above and below the extension of the Tundra Mine zone and it is these features that host multiple gold-bearing zones at Walsh Lake.

Seabridge has identified seven gold-bearing targets along shear zones located near the same stratigraphic contact between mafic volcanic rock and clastic sedimentary rocks that hosts Walsh Lake – two to the south of the deposit and five to the north.

"These seven targets have been carefully selected on the basis of historical data and our own mapping and geophysical work which clearly shows that they are in the same geological setting as our Walsh Lake discovery," said Fronk.

The initial 2018 drilling will determine which of these targets have the size and are close enough to the surface for follow-up drilling. If the company's requirements are met, Seabridge expects to proceed with infill drilling to support a resource estimate.