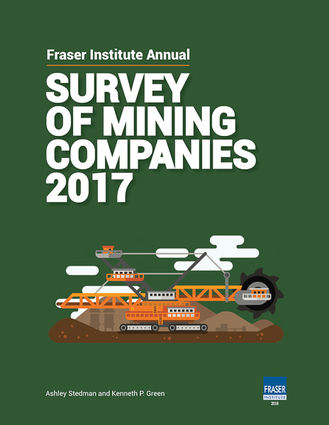 The 360 global miners that responded to the survey ranked Finland as the most attractive place on Earth for mineral exploration and mine development.

"Finland is a very transparent system, with excellent access to data and information," a mining consultant that responded to the survey wrote.

This high regard for Finland's mining policy, coupled with what is considered the sixth best mineral potential in the world, boosted the country to the top of the survey's Investment Attractiveness Index, which weighs both the mining executives' opinion of mining policy and minerals endowment.

Though this survey is subjective, it provides valuable insight into the views of 360 mining executives and what parts of the world they see as good places to get a healthy return on their investments.

"Capital is fluid and one jurisdiction's loss can be another's gain because mining investors will flock to jurisdictions that have attractive policies," Green said.

Alaska is typically among the top 10 when it comes to pure mineral potential. On the 2016 survey, however, mining executives ranked the Far North state as the 15th richest mining jurisdiction, a stunning 13-position drop in one year. On this year's survey Alaska regained its luster in the eyes of global miners, who ranked the 49th State as the 5th richest minerals jurisdiction.

To get a sense of how mining executives perceive a jurisdiction minerals potential, the Fraser Institute asks them to ignore current policies that may sway investment decisions and rank the global mining jurisdictions strictly on their geological endowment. Referred to as the "Best Practices Mineral Potential" Index, this portion of the survey provides insight into geological side of mining companies decisions to invest in a jurisdiction.

While it would take a literal Earth trembling event to materially change the mineral potential of any mining jurisdiction over the course of a year, more subtle forces can sway the perceptions.

These subtle forces may indicate that mining executives can not completely ignore the policy obstacles that may stand in the way of realizing a jurisdiction's mineral potential when ranking this endowment.

Such mixed views are reflected in the large swings in Alaska's mineral potential and the comments respondents to the Fraser Survey made about the Far North state.

"Alaska has incredible mineral potential and a favorable permitting regime, but regulatory processes remain unclear," said the president of a large mining company. "In particular, ballot initiatives are creating uncertainty for investors."

While most would agree that Alaska has incredible mineral potential, how does the 49th State do on the policy side of the equation?

Overall, mining executives ranked the Far North 29th, which puts it in the top third of the 91 mining jurisdictions considered and slightly below the average of the 13 U.S. states included in the survey.

Considered a report card on the mining policies of governments, the "Policy Perception Index" section of the Fraser survey is a compilation of responses on a broad range of policy topics important to miners.

The survey respondents ranked Nevada with the 5th best mining policy in the world and the best in the United States, while California was ranked 61st globally in terms of mining policy and the worst jurisdiction in the U.S.

The Republic of Ireland has held a steady hold on having the world's best mining policies for five years running. This reflects the global mining community's view that the European country has a predictable mining policy.

"The Republic of Ireland is a jurisdiction where they do as they say, constantly, and in a transparent manner. Officials have a can-do attitude that follows the laws of the land, which is a refreshing change," the president of a minerals exploration company said.

Such glowing reviews were not made about Alaska's mining policy. Instead, the mining sector sees a system where forces outside of the government have the ability to use the legal system and ballot box to delay the realization of the state's rich minerals potential.

Mining executives ranked Alaska's legal system 40th in the world. For comparison, Finland has the highest rated legal system and the Republic of Ireland is 2nd.

The reservations caused by such legal disputes and other policy elements such as the "Stand for Salmon" initiative, which is likely to be on Alaska's election ballot this fall, seems to be creating apprehension when it comes to the state's environmental regulations.

When asked about "uncertainty concerning environmental regulations," mining executives ranked Alaska at 57th, which is four positions below the Democratic Republic of Congo, and well into the bottom half of the worldwide jurisdictions.

The United States as a whole does not do well when it comes to environmental regulation certainty.

Nevada, the top U.S. state, was ranked 13th in this category and you have to scan down to the 33rd position, Utah, to find the second-best state.

At 86th, California is considered the 5th worst jurisdiction in world when it comes to environmental regulation certainty.

Besides a natural endowment from eons of favorable geological events, much of the reason Alaska's minerals potential ranks so high is much of this world-class mineral endowment is located well beyond the sparse infrastructure there, making it logistically challenging and costly to extract the vast assortment of minerals and metals for which the Far North state is renowned.

"While the state has 17 percent of the nation's land mass and is by far the largest state, we have 0.4 percent of the nation's total lane-miles of road," Alaska Division of Geological and Geophysical Surveys Director Steve Masterman informed lawmakers on Capitol Hill last year. "The limited road system has real impacts on the cost of transportation of goods to communities throughout the state, and presents real challenges to the exploration and development of mineral resources."

This view of Alaska's lacking infrastructure is understood by policymakers representing the state.

"We come from a state where we have a great deal of resources to offer but more often than not our opportunity is limited because our infrastructure is limited," said Sen. Lisa Murkowski, R-Alaska.

Known as the Last Frontier for good reason, Alaska hosts several undeveloped world-class mining camps – Pebble, Donlin Gold and the Ambler Mining District, to name a few – that have yet to be tapped due partially to their remote locations. 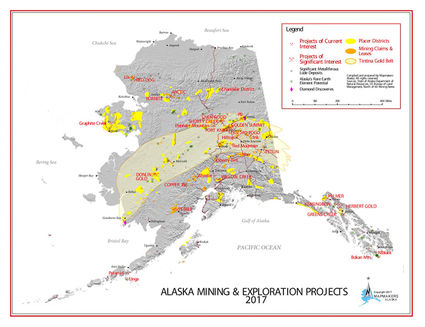 Alaska is rich in minerals deposits but poor in infrastructure.

Alaska's infrastructure – more precisely the lack thereof – is a heavy weight on the policy perception side of the equation for Alaska.

When asked about the quality and availability of power and roads, mining executives ranked Alaska 64th out of the 91 mining jurisdictions considered.

Masterman said that Washington D.C. could help unlock Alaska's vast mineral potential and curb the United States' dependency on foreign sources for minerals that are critical to economic and national security.

"At a time when domestic infrastructure investment is a national priority, the United States is becoming even more dependent on foreign supplies of minerals rather than producing domestic supplies," Masterman testified.

"Alaska's storehouse of mineral wealth could be key to reversing this trend," he added.