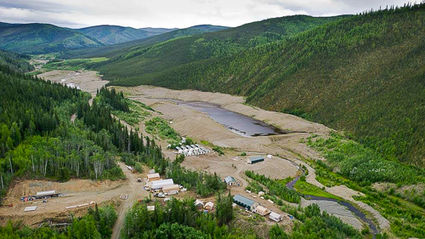 The White Gold exploration camp is set up at Thistle Creek, a placer gold stream that cuts through the White Gold property.

White Gold Corp. March 5 reports that drilling has outlined more than 1.24 million ounces of gold at its White Gold property in the Yukon.

White Gold said the mineralization at Golden Saddle and Arc is also known to extend beyond the limits of the current resource estimate and the company's geologic models in this area conceptually include an estimated 7 to 10 million metric tons grading between 1 to 1.5 g/t gold.

Mineralization on all zones is open along strike, down dip and down plunge with grades increasing at depth. 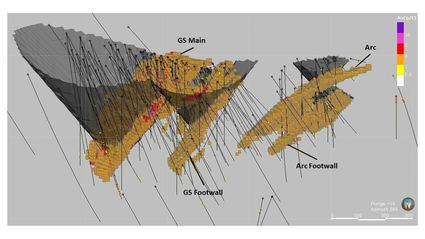 A block model of the 2018 resource contained within the Golden Saddle and Arc deposits at the White Gold property.

"We are very pleased with the mineral resource estimate on the Golden Saddle and Arc. It provides us with a solid foundation from which we can expand the current mineral inventory in future exploration programs," said White Gold Vice President of Exploration Jodie Gibson. "Particularly exciting is the GS Main which has a remarkably consistent core at grades (greater than) 3g/t Au that has been traced from surface to approximately 400 meters depth and is open down dip and down plunge. The Arc also remains open for expansion in all directions and our 2017 program demonstrated a subparallel zone to the Arc."

White Gold and previous operators, Kinross Gold and Underworld Resources, have completed 44,698 meters of drilling at Golden Saddle and 11,911 meters at Arc.

"Combined with the numerous other known exploration targets on the property that have received minimal to no drill testing and the broad advances in our understanding of the regional geology and controls on mineralization, we believe there is significant potential to expand the current resource base and make new discoveries," Gibson added. "Furthermore, recent investments into access and infrastructure via the Yukon Resource Gateway project continues to improve the overall economics within the district."