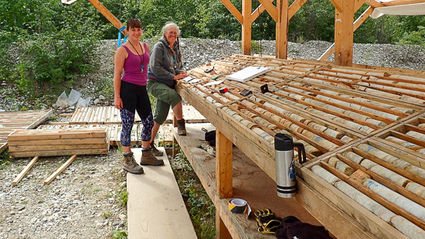 The company's 527 square kilometers (203 square miles) of mining claims blanket a 55-kilometer- (34 miles) long swath of the Klondike Gold District, which has produced more than 20 million ounces of placer gold since the stampede to the legendary mining district in 1898.

Designed to systematically test for gold mineralization along a trend that spans the entire property, from its Lone Star prospect to the new Gold Run target, this year's exploration program aims to demonstrate the larger gold potential of the Klondike District project.

The first ever detailed structural and lithologic mapping and prospecting across the entire district is also slated for this year and Klondike plans to follow-up on any new targets generated.

Combined, this systematic program endeavors to show that gold mineralization can occur across the length of the Klondike, from the northwest end at the Lone Star target to the southeast end at the new Gold Run target.

Exploration of the Lone Star area suggests that a major fault – Rabbit Creek Thrust – has been a conduit of gold-bearing fluids and that secondary faults are the location of gold mineralization as quartz veins or as broader disseminations. Drill testing three of these structures yielded significant gold intersections associated with these faults.

It is inferred from magnetics that these individual or similar fault structures extend through the length of the Klondike property and systematic testing for gold mineralization associated with faulting is the top priority of the 2018 program.

The second priority is the continuation of drilling at known gold targets and newly identified prospects.

Lone Star, a sizeable gold target which lies above the confluence of celebrated Bonanza and Eldorado Creeks, will be an early focus of exploration in 2018.

The company also intends an initial drill program at Gold Run at the southeast end of the property.

Mapping in 2017 identified a thrust fault that Klondike believes could be an extension of the Rabbit Creek Thrust, and two secondary structures in similar positions to the Bonanza and Eldorado faults. Prospecting located gold bearing quartz veins with visible gold from historical mine dumps, as well as gold-bearing mineralization from altered outcrops lacking noticeable quartz veins interpreted to be a style of disseminated gold mineralization.