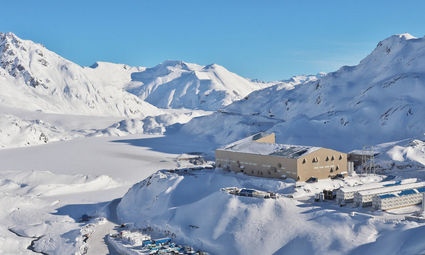 A program to help improve the grade of ore feeding the mill is boosting gold production at Pretium's Brucejack gold mine in northwestern British Columbia.

Pretium Resources Inc. April 11 reported that its Brucejack Mine in northwestern British Columbia produced 75,689 ounces of gold during the first quarter of 2018, a nearly 7 percent increase over the 70,281 oz produced during the previous quarter.

"Gold production improved steadily through the first quarter, with 32,910 ounces produced in March. This result is attributed to the successful implementation of a number of operational improvement initiatives," said Pretium President and CEO Joseph Ovsenek.

Pretium achieved commercial production at Brucejack in mid-2017 and the operation produced 228,173 oz of gold during the first nine months of operation.

While the mill has outperformed its 2,700-metric-ton-per-day capacity, including 2,905 tpd during the first quarter, the gold grades being fed into it have been lower than expected.

To rectify this, Pretium has implemented a grade control program to optimize stope shapes resulting in reduced dilution and optimized grade to the mill. This program has improved short-term grade prediction with drilling, sampling and local modelling.

Pretium said the significant increase in March gold production results reflect the first impact of grade control integration into the mining process and these results are expected to continue to improve with the full integration of the grade control program during the second quarter.

As part of the grade control program, infill drilling is required at 5-meter to 7.5-meter centers to refine stope location and dimensions prior to mining.

The RC rig, which provides a larger sample and is expected to be faster and more cost effective than a core drill, is part of a trial program for underground drilling at Brucejack.

Pretium said access to the broadest possible range of stopes will maximize stope blending and is expected to improve the management of production grades.

To improve access and build stope inventory, the rate of underground development has been increased to 700 meters per month, up from 420 meters originally envisioned in the feasibility study for Brucejack.

The company plans to have 10 to 12 stopes with a range of grades available by mid-year.

As the mining moves into areas more thoroughly drilled, the company expects the ore reaching the mill to be closer to the grades expected.

"Our grade control program has now been fully integrated into our mining process and the rate of underground development has increased to provide for additional stopes in our inventory," said Ovsenek.