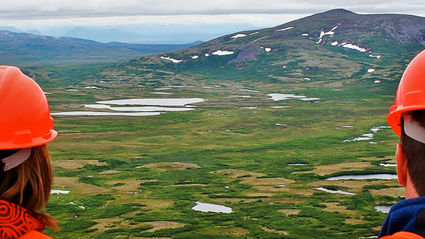 More than 1,300 holes have been drilled across this expanse of Southwest Alaska where the Pebble deposit is located. Alaska Department of Natural Resources is requiring the Pebble Partnership to post a $2 million bond to cover remediation and reclamation from past exploration and current activities at the project.

Alaska Department of Natural Resources April 19 announced that it is taking steps to reestablish the Bristol Bay Advisory Group, originally created to provide input on the 1984 Bristol Bay Area Plan.

DNR said it anticipates the advisory group will review and may recommend changes to the Bristol Bay Area Plan.

"We are taking steps under our existing statutory authorities to boost the state of Alaska's engagement with Bristol Bay stakeholders. We see the advisory group as an important way to accomplish this goal," said DNR Commissioner Andy Mack.

In upcoming weeks, DNR will solicit applications for seats on the advisory group and schedule a public meeting to gather input on the scope of the advisory group. Meetings will be in the Bristol Bay region and open to the public.

"The reinstatement of the Bristol Bay Advisory Group gives local residents a powerful tool to guide land and resource management in their region," Gov. Bill Walker said in a separate statement.

DNR also reported that it has issued the Pebble Limited Partnership a permit to carry out its activities during the 2018 field season on its mining claims in the Bristol Bay region.

DNR pointed out that while the Pebble Partnership has initiated the environmental review process for developing a mine at Pebble on the federal level, it has not applied for the state permits necessary for mine development. The land-use permit issued by the state only authorizes exploration and reclamation-related activities.

"By issuing this permit, we authorize the Pebble Limited Partnership to do necessary work on its claims and ensure that state lands receive good stewardship," Mack said.

The regulatory agency said the more stringent requirements followed the review of more than 2,000 public comments and an exhaustive analysis.

During the comment period on Pebble's application for the permit, questions arose on the condition of certain drill holes and whether hundreds of these holes drilled during active exploration would be properly reclaimed. After reviewing these concerns, DNR decided to include a financial assurances requirement of US$2 million to the permit it issued.

While financial assurance typically is not required for mineral exploration projects in Alaska, more than 1,300 holes have been drilled at Pebble and additional work is anticipated as the project moves towards permitting and development.

DNR said the Pebble Partnership complied with the stipulations of the 2017 land-use permit and closed 142 boreholes last year.

The state natural resource agency said it plans multiple inspections during the 2018 field season to monitor both the drilling of new boreholes and continued reclamation activity.