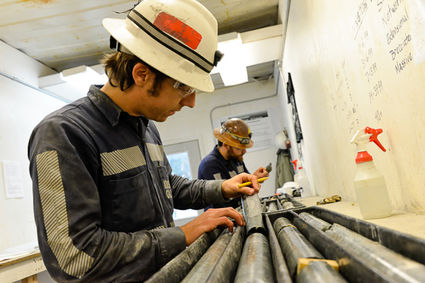 Technicians log core from drilling at Kensington. Last year, Coeur Mining invested roughly $8.6 million on upgrading and expanding the Jualin deposit and exploring other higher-grade areas at the Southeast Alaska gold mine.

Coeur Mining Inc. April 25 reported a 25 percent increase in proven and probable reserves at its Kensington gold mine. According to the updated technical report, Kensington now hosts 620,700 ounces of gold in 2.96 million tons of reserves averaging 0.21 oz per ton, or 7.1 grams per metric ton, gold, roughly a 10 percent increase over the year-end 2016 reserves.

"The results of Kensington's tec...