Sabina, KIA enter pact for Back River Mine 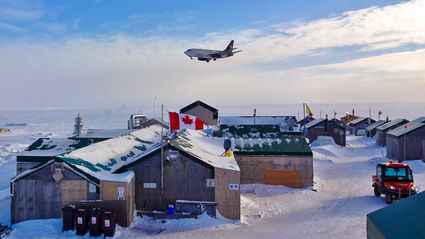 A Herc 747 flies over Goose camp at Sabina's Back River gold project in Nunavut. An agreement with KIA provides Sabina secure tenure of the Goose property for the next 20 years.

Sabina Gold & Silver Corp. and the Kitikmeot Inuit Association April 23 announced that they have entered into 20-year benefit and land tenure agreements that lay out Sabina's rights and obligations with respect to surface land access on Inuit owned land on the Back River gold project in Nunavut.

KIA owns 106,360 square kilometers (41,066 square miles), an area about the size of the U.S. state of Tennessee, of surface lands in the Kitikmeot Region. The Back River project footprint blankets several parcels of these Inuit lands south of Bathurst Inlet.

These agreements provide Inuit of the Kitikmeot Region with financial and socio-economic benefits from the proposed gold mine on the Goose property of the Back River project, as well as initiatives to create additional opportunities outside of the mining industry.

These benefits include: a grant of 6.7 million Sabina shares to the KIA; a 1 percent net smelter return royalty paid to the KIA on production at Back River on the properties that are subject to a commercial lease; as well as training and jobs for Inuit of the Kitikmeot Region

Sabina has also agreed to an initial investment of C$4 million in regional wealth creation initiatives in the Kitikmeot – C$2 million to be paid immediately and the balance by the time a production decision is made for the mine at Back River. Additional payments are to begin the third year following commercial production if Sabina-related employment targets are not achieved. KIA said the purpose of this wealth creation initiative is to create new long-term operating jobs outside of the mine to expand and diversify the Kitikmeot economy

Water and wildlife compensation agreements involve additional payments if Sabina fails to implement caribou mitigation commitments regarding calving and post-calving periods made to the Nunavut Impact Review Board.

"These agreements allow a mine to be built and operated on Inuit-owned land and will provide significant social and economic opportunities and benefits to Inuit of the Kitikmeot Region," said Kitikmeot Inuit Association President Stanley Anablak. "Sabina has been very professional in these negotiations. We wish them success in their development plans for the mutual benefit of Sabina shareholders and Kitikmeot Inuit."

Sabina's plans include the development and operation of a 3,000-metric-tons-per-day mine on the Goose property, one of seven land parcels that make up the roughly 120,000-acre Back River project.

The proposed mine on the Goose property is forecast to produce roughly 2.3 million ounces of gold over an 11.8-year mine life.

The Goose property currently hosts 5.33 million ounces of gold in the measured and indicated resource categories along a 5,000-meter-long trend. Most of this gold is found in the Llama and Umwelt zones, and ongoing drilling is tracing high-grade extensions of these zones.

Under the agreements with Sabina, KIA confirms it has been adequately consulted about Back River and agrees to operations at the gold project; and provides the company with commercial leases authorizing the development of mines and related operations and closure activities at the Goose property.

Sabina said these milestone agreements with KIA provide the long-term certainty of tenure required to de-risk, finance, develop and ultimately mine the gold at Back River.

"These agreements have been negotiated in good faith with a result that benefits both Sabina shareholders and our Nunavut stakeholders," said Sabina President and CEO Bruce McLeod. "For our shareholders, we have created more value in the company by securing tenure and further de-risking the project. Inuit of the Kitikmeot Region have the opportunity to benefit from gold production on their lands both financially and through initiatives to create long term economic sustainability in jobs and training in and outside of the mining industry."

Sabina and KIA said these agreements demonstrate that Nunavut is a pro-responsible mining region and underscore the territory's "open for business" strategy.