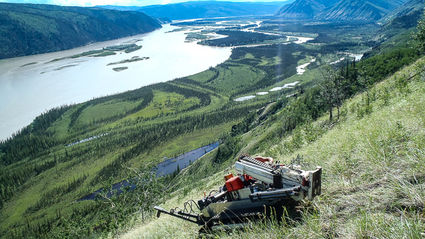 Developed by Dawson City-based GroundTruth Exploration, the GT Probe can take samples of the soil-bedrock interface at a fraction of the cost and with less environmental disturbance than the traditional method of trenching to take samples at the bedrock surface.

About half of this year's C$9 million exploration program is focused on regional targets across the extensive land holding, including more than 100 rotary air blast (RAB) drill holes, airborne geophysical surveys, over 22,000 soil samples and other exploration activates.

The balance of the 2018 program will focus on expanding the roughly 1.2-million-ounce gold resource at the company's flagship White Gold property.

The company's portfolio is a reconvening of dozens of White Gold prospects legendary Yukon gold prospector Shawn Ryan has identified over the past decade.

"I'm helping them on the technical side; we got Rob Carpenter, who was leading the charge with Kaminak, on our board of directors," Ryan explained.

As president and CEO of Kaminak, Carpenter recognized the potential of Ryan's prospecting at Coffee and took the discovery to a roughly 3-million-ounce gold project that led to Goldcorp buying Kaminak for some C$520 million.

Agnico Eagle, which was interested in White Gold Corp. and the potential of the Yukon gold district bearing the same name, invested C$15 million to own a 19.9 percent stake in the new Yukon-focused gold explorer.

Agnico does not want its investment spent on drilling one gold deposit. Instead, the gold miner wants to leverage White Gold's grassroots exploration expertise and large land holdings in the district.

"They actually put it in the contract 'no delineation drilling with this money,'" Ryan said.

While Ryan had reassembled an enormous land position that reflects more than a decade of his savvy prospecting in the Yukon, one piece was missing – White Gold, the original discovery that sparked a gold exploration rush to a district that would come to bear its name.

By mid-2017, White Gold cut a deal to buy the namesake property from Kinross, which had bought the property through the acquisition of Underworld Resources in 2010.

In exchange for the White Gold property, Kinross owns a 19.9 percent interest in White Gold Corp.

"We look forward to working with Agnico Eagle and White Gold Corp. to support the pursuit of quality development opportunities in this highly prospective and largely underdeveloped district," Kinross President and CEO J. Paul Rollinson said at the time. "This investment will allow the three companies to pool their expertise together to strengthen their position in this excellent mining jurisdiction."

This pursuit began with a roughly C$9 million program in 2017 that expanded the deposits on the White Gold property and narrowed drill targets across the wider district.

"We are very pleased with the result of our 2017 regional exploration program, which has generated several new and highly prospective targets on our extensive land package and further validated and defined previously identified high-priority targets," said Gibson.

This year's regional exploration program will focus on high priority drill targets turned up in 2017 and before.

Ryan has a database of more than 300,000 soil samples taken from prospects across the White Gold District. To narrow the best drill targets uncovered by this extensive sampling, White Gold Corp. is utilizing GroundTruth Exploration, an innovative exploration company run by Ryan's wife Cathy Wood.

With a number of targets ready for the first phase of drilling, White Gold Corp. is planning roughly 100 RAB or reverse circulation holes this year to test targets on five properties.

The priority projects for this drilling include:

• Pedlar, a property just northeast of Coffee that hosts an untested porphyry target consisting of a 4,000- by 1,500-meter trend of strongly anomalous copper-molybdenum in soils and rock samples; and

In all, the regional exploration is expected to be carried out on 16 of White Gold Corp.'s Yukon properties.

The balance of White Gold Corp.'s 2018 program will focus on its namesake property, including 8,500 meters of diamond and 6,000 meters of RC drilling.

Advanced metallurgical testing on the Golden Saddle and Arc deposits will be completed to guide further economic studies as well as assess the potential for near surface and oxidized mineralization.

White Gold Corp. said mineralization at both the Golden Saddle and Arc are known to extend beyond the limits of the current resource estimate and are believed to remain open in multiple directions. 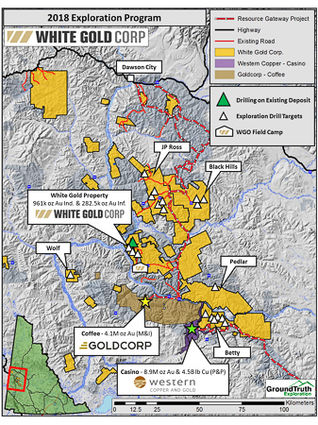 RC drilling on the White Gold property is planned to focus on infill and expansion of the Arc deposit and testing of other defined high priority targets on the property including the McKinnon, Donahue, and Ryan's Showing.

Additional work planned on the White Gold property this year include IP-Resistivity surveys, GT Probe, soil sampling and geologic mapping will also be conducted to evaluate and define additional drill targets on the company's namesake property.

Crews are currently opening the camp on Thistle Creek, which is next to the White Gold property, and drilling is slated to begin by the end of May.

"I am eagerly anticipating the coming year which has the potential to be a very exciting season," said Ryan.