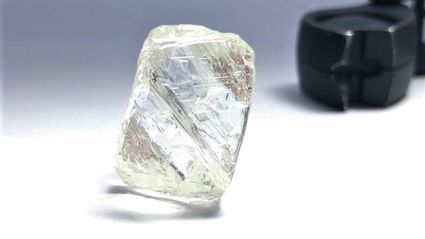 This 95.21 gem quality diamond recovered from the Gahcho Kué Mine in Northwest Territories helped to boost the proceeds from Mountain Province's fifth diamond sale this year to US$30.3 million.

Mountain Province Diamonds Inc. June 28 reported US$30.3 million in proceeds from its latest sale of diamonds from the Gahcho Kué Mine. This is the fifth sale of 2018 and the Toronto-based company has brought in US$137.4 million so far this year from selling its share of the diamonds from the Northwest Territories operation.

Through the end of May, this newest Canadian diamond mine has produced 8.83 million carats of diamonds.

"The fifth sale of the year saw a strong performance for Mountain Province in sales and pricing, reflecting the growth in appreciation of our production by our customers as well as a continued strong rough diamond market," said Jonathan Comerford, who served as interim president and CEO of Mountain Province through the end of June. "We set a new record for total proceeds realized by Mountain Province in a tender, and the normalized value for this sale at US$86 a carat is one of the highest we have achieved to date."

A 95-carat gem diamond of top clarity recovered at Gahcho Kué likely helped to boost the value of the overall parcel.

While Mountain Province was able to say the sales price for "95-carat gem exceeded expectations, with the final result more than doubling the previous highest value achieved for a single diamond," the company is keeping further details private to protect the confidentiality of the buyer.

"This tender also saw the successful sale of our highest value diamond to date, at a price we were very happy with," said Comerford.

Stuart Brown, who has more than 25 years of experience in the diamond sector, took over as president and CEO of Mountain Province Diamonds on July 1.

After numerous roles within De Beers over a period of 14 years, Brown was appointed as CFO of the De Beers Group in 2006. He held that position for over five years, and in 2010 was appointed joint acting CEO to run De Beers' global activities in addition to his CFO duties.

In 2013, he took over as CEO of Firestone Diamonds, a United Kingdom-based producer with operations in Africa.