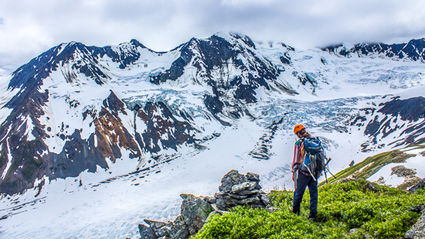 A geologist carries out exploration across the valley from Nunatuk, a red-stained outcrop at AG Zone.

Being carried out by a joint venture between Constantine Metal Resources (51 percent) and Dowa Metals & Mining Co. Ltd. (49 percent), this year's drilling is focused on expansion of the AG Zone; definition and expansion of the South Wall-RW copper-zinc-silver-gold deposit; and testing new targets across the district-scale Palmer property.

Initial results from this program have expanded upon the high-grade silver and zinc mineralization discovered at AG Zone in 2017.

Subsequent drilling expanded this discovery to a zone that measures 225 meters along strike and to a depth of 275 meters.

This year's drilling there looks to expand the zone, which remains open both laterally and vertically.

These intersections are roughly half-way between the AG Zone and JAG, an outcrop on the opposite side of the ridge southeast of AG that appears to be part of the same system. Samples previously collected from the surface at Jag returned grades of up to 537 grams per metric ton silver and 20 percent zinc.

"This is an exceptional start to our 2018 drill program at Palmer. The intersections are major step-outs to our 2017 AG Zone discovery and confirm significant size potential," said Constantine Metal President Garfield MacVeigh. "We are particularly pleased with the very strong silver and gold contribution to the base metal values and the substantial widths."

The company said this significant precious metal mineralization at AG is characteristic of other Late Triassic VMS deposits in the region such as Hecla Mining Company's Greens Creek, one of the largest and lowest cost primary silver mines in the world.

Constantine intends to have a maiden resource for AG Zone this year, which will be included in the updated resource estimation that is currently underway for Palmer.

AG Zone is situated about 3,000 meters southwest of the South Wall-RW deposit. 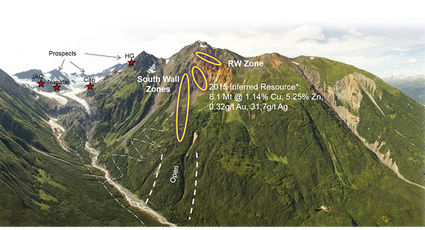 The Jag and Nunatuk prospects, now part of the AG Zone, lie about 3,000 meters southwest of the South Wall-RW deposit at Constantine Metals' Palmer project in Alaska.