Osisko steps up the pace at Pine Point 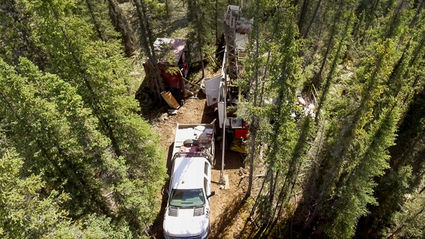 To achieve its goal of completing around 700 holes to upgrade the historical zinc-lead resource at Pine Point to modern reporting standards, Osisko Metals plans to have seven drills turning on the property this summer.

Osisko Metals Inc. July 24 announced plans to step up the pace of its already aggressive drill program at the Pine Point zinc project in Northwest Territories.

"It's our intention to keep moving this project forward aggressively in order to capitalize on the current favorable zinc market fundamentals," said Osisko Metals President and CEO Jeff Hussey.

Located about 42 kilometers (26 miles) east of Hay River, Pine Point is the site of a historical mine operated by Cominco (now Teck Resources) from 1964 to 1988. During that time, Cominco mined zinc-lead ore from a series of 50 surface and underground deposits along a 60-kilometer (37 miles) trend. In all, Cominco discovered roughly 90 such deposits on the property.

The objective of Osisko Metals' 2018 drill program at Pine Point is to convert 50 million metric tons of unclassified near-surface historical resources containing 4 billion pounds of zinc and 1.5 billion lb of lead to NI 43-101-compliant inferred and indicated resources by early 2019.

"Delivering the resource remains a priority for us to unlock the true value potential of this camp," Hussey said.

The company got started on this goal with a more than 9,000-meter winter drill program on the property that encountered zinc mineralization comparable to the historical drilling completed by Cominco.

In June, Osisko resumed drilling at Pine Point with a planned 570-hole program slated for this summer.

To keep this aggressive drill program on track, the company applied for and obtained the necessary permits to increase its drill rig count, which is expected to increase from three to seven drills within the next two weeks.

The majority of this expansive summer drilling will continue to be focused within the central 20-kilometer- (12.5 miles) long portion of the property that is located near infrastructure and accessed by paved highway. This area includes the East Mill and Central zones, where mineralization is shallow and new compliant resources will form the resource base for future studies.

In parallel with the drilling, a compilation of Cominco's historical exploration data is underway in order to prepare for regional brownfield exploration drilling and for an airborne gravity survey that will be conducted following the 2018 conversion program of the historical deposits. This high-resolution airborne gravity survey will assist in identifying new targets both along strike and at depth.

Osisko Metals said the favorable stratigraphy across the Pine Point camp is up to 300 meters thick, providing for excellent brownfield exploration potential at depth.

"We expect to proceed with an extensive brownfield exploration campaign in 2019 following the historical resource conversion program," Hussey said. 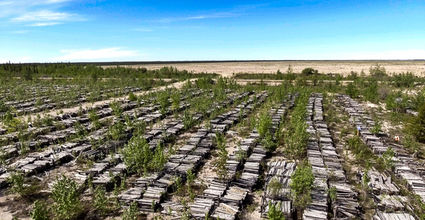 Core from Cominco's historical drilling at Pine Point are laid out in rows on the property. Osisko Metals is compiling the data from the past exploration in preparation for a brownfield drill program slated for 2019.