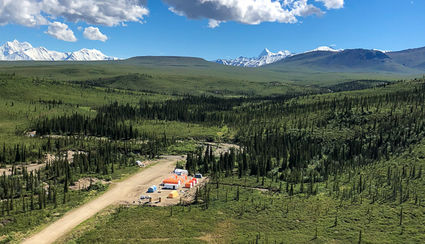 This camp serves as headquarters for expanding the known high-grade zinc deposits on White Rock Minerals' Red Mountain project and reconnaissance exploration across the wider 35,300-acre property in Alaska.

Rock chip sampling of the massive sulfide from the discovery outcrop, as well as trenching along strike to define the position of the mineralization, returned assays of up to 18.6 percent zinc, 5.4 percent lead, 2.3 percent copper, 147 grams per metric ton silver and 0.7g/t gold.

The first two holes drilled at Hunter – HR18-01 and HR18-02 – cut the massive sulfide mineralization up to 80 meters down-dip from the outcrop.

The second hole, drilled from the location and angled north, cut the VMS horizon a further 30 meters down-dip.

Both drill intersections contain abundant visual zinc with minor chalcopyrite (copper) mineralization, similar to what was observed in the Hunter discovery outcrop.

"We are excited with the success of the first two drill holes at the newly discovered Hunter prospect. These high-grade zinc results from the discovery outcrop are extremely encouraging," said White Rock Minerals CEO Matt Gill. "Grades in excess of 20 percent combined zinc-lead with significant silver grades, as well as copper credits greater than 2 percent, mark the potential for a significant deposit to emerge at Hunter."

This would add to the two deposits already identified at Red Mountain – Dry Creek and West Tundra Flats.

"(S)uch high-grade mineralization at the three main prospects defined to date bodes well for future high-grade discoveries, with the Red Mountain project shaping up to be a high-grade zinc VMS camp of the future," said Gill.

"What is exciting is that our on-ground recon crew has to date covered just 20 percent of our strategic tenement package of 143 square kilometers (35,300 acres) and already identified some seven areas of interest. That leaves a lot of upside for further discoveries," said the White Rock Minerals CEO.

The drill is now targeting Redback, a prospect turned up by the recon crew about 1,000 meters east of Hunter.