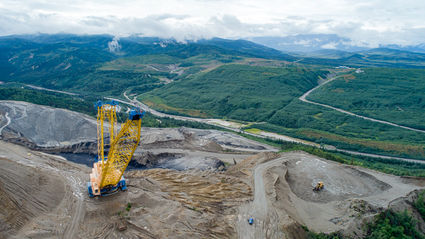 HEALY: Hundreds of friends, family and colleagues arrived at Usibelli Coal Mine Inc.'s Healy operation to celebrate the 75th anniversary of the longest lived large mining operation in Alaska – an event that highlighted the coal company's pioneering past, current growth and bright future.

During a speech to kick off the celebration, Usibelli Coal President Joe Usibelli, Jr. said the Healy operation is currently delivering roughly 1 million tons of coal per year to five power plants in Alaska's Interior, tonnage that is expected to swell to 1.25 million tons when the Healy No. 2 power plant at the mouth of the mine and a new coal-fired electric and heat facility at the University of Alaska Fairbanks come on-line in the coming weeks.

Considering that Joe Jr.'s grandfather started the company in 1943 with a contract to deliver 10,000 tons of coal to Ladd, a strategic World War II military base on the outskirts of Fairbanks that continues today as Fort Wainwright, the company has come a long way over the past 75 years.

While the modern Usibelli Mine has a fleet of enormous equipment to deliver the nearly 3,000 tons of coal per day to electrical and heat generating facilities in Interior Alaska, Emil started the company off with a small International TD-40 dozer to strip the overburden off coal seams near the town of Healy and push the exposed coal onto a GMC logging truck converted to haul the fuel 110 miles north to Ladd Army Airfield.

While many of Emil's coal mining contemporaries were skeptical that the Italian immigrant would be able to fulfill his obligations, he did deliver as promised, beginning a legacy that is 75 years and counting.

"To me that is the definition of pioneer, to do things that way – with ideas, with hard work, with tenacity," Joe Jr. told the large crowd gathering at the anniversary celebration.

The third generation Usibelli Coal Mine president said it is these same pioneering traits that have helped the coal mining company to survive for the past 75 years.

Dropping a bit of wisdom, he said these same characteristics are also key elements to personal success.

And, when Usibelli Coal Mine talks families, it goes beyond the four generations of Usibelli's working at the mine.

"We are very family oriented – we are still a family-owned company, we have a family of employees," Joe Jr. said.

With more than one-third of the roughly 100-person all-Alaskan workforce at UCM representing the second, third or fourth generations within their families to have worked at the mine, it is no wonder the company considers these employees a part of the wider Usibelli family.

Built upon a foundation of pioneer values and with a family of employees carrying the legacy forward, Joe Jr. is optimistic about UCM as it mines its way towards a century anniversary.

"We have a very bright future going forth," he told the crowd gathered at the mine.

In the near term, this bright future is being fueled by two Interior Alaska power plants that are expected to increase the need for Usibelli coal by roughly 25 percent.

The first of these facilities to need coal deliveries is Healy No. 2, a 50-megawatt power generation facility owned by Golden Valley Electric Association.

Healy No. 2 was built adjacent to Usibelli's Healy operation in the 1990s as a plant to demonstrate new technology developed under the United States Department of Energy's Clean Coal Technology Program.

Since acquiring the plant from the Alaska Industrial Development and Export Authority in 2013, GVEA has made significant environmental upgrades and updates to the systems and controls at the clean burning coal plant.

GVEA started testing this plant with oil and has now begun feeding the facility coal. Full operations of Healy No. 2 are slated for September.

At the same time, the University of Alaska Fairbanks is putting the finishing touches on a coal fired boiler that is designed to deliver low-pressure steam to heat the campus and produce 17 megawatts of electricity.

Commissioning of this facility began in April and the first firing of the boiler is scheduled for this month.

"They are going through the test phases right now and in another few weeks the new coal plant at the university is supposed to start up," Joe Jr. informed the crowd.

With Healy No. 2 and the upgraded UAF power plant, UCM delivers coal that continues to provide low-cost power to the military bases, businesses and roughly 100,000 residents in Interior Alaska. 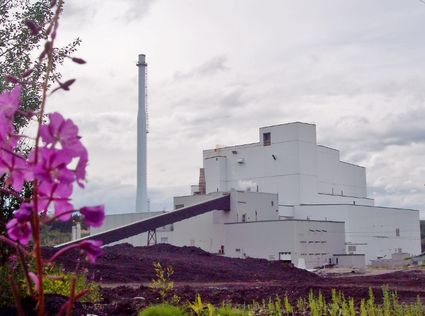 With Golden Valley Electric Association's Healy No. 2 power plant coming online at the mouth of the Usibelli Mine, the annual in-state demand for UCM coal is expected to increase to 1.25 million metric tons.

Theses deliveries include 250,000 tons per year of some of the world's cleanest burning coal to Fort Wainwright, the same strategic army base that Emil delivered the first 10,000 tons to in 1943.

"So, 75 years ago I am sure my grandfather had no idea that this company would last this long," said Joe Jr.

With more ideas, hard work, tenacity and family, it seems likely that fifth and sixth generation Usibellis will be hosting a 100-year anniversary in 2043.

"Coal will play a critical role in achieving our state's energy, economic and environmental goals, now and into the future," Usibelli Coal Mine Vice President of Public Relations Lisa Herbert wrote recently. "The tremendous leadership and vision from the Usibelli family, and the incredible passion and devotion of the mine's employees, have been the key ingredients of UCM's success for the last 75 years. These strengths promise to give the mine a prosperous and secure future for many decades to come."