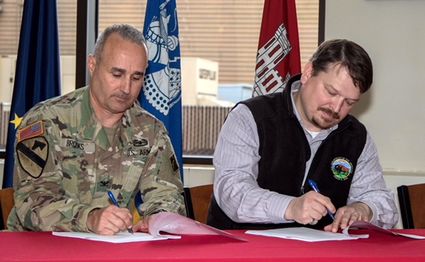 Army Corps of Engineers Alaska District Commander Michael Brooks (left) and Department of the Interior Assistant Secretary for Land and Minerals Joe Balash (right) sign the joint record of decision for developing a mine at the enormous Donlin Gold project in Southwest Alaska.

Roughly six years after applications to federal authorities, Barrick Gold Corp. and Novagold Resources Inc. have crossed the finish line on gaining the key federal permits needed to build a mine at their 39-million-ounce Donlin Gold Mine project in Southwest Alaska.

This major permitting milestone was reached on Aug. 13, when the U.S. Army Corps of Engineers and the Bureau of Land Management issued a joint record of decision for Donlin Gold, marking the completion of a rigorous review of the proposed mine under the federal National Environmental Policy Act process.

"The issuance of the Donlin Gold ROD and key project permits is a significant milestone for both partners," said Barrick Gold Executive Vice President of Exploration and Growth Rob Krcmarov. "It would not have been possible without exceptional professionalism of the Donlin Gold team as well as members of the Corps, BLM, and other federal and state agencies.

During an Aug. 13 ceremony at the Corps' Alaska District headquarters building, Col. Michael Brooks, commander of the Army Corps Alaska District, and Joe Balash, assistant secretary of land and minerals management for the U.S. Department of Interior, penned their names on the document recording the agencies' findings with respect to their independent authorities.

This marks the first such joint decision under Executive Order 13807, which President Trump signed last August as part of his effort to strengthen the American economy by eliminating inefficiencies in the management of environmental reviews and permit decisions.

"The Donlin Gold mine project in Alaska is a great example of cooperation between the Corps and BLM," said Secretary of the Interior Ryan Zinke. "We are proud to have Assistant Secretary Balash and Colonel Brooks sign the first ever joint federal record of decision, which demonstrates our agencies' commitment to executing the principles outlined in the President's Executive Order 13807 and the One Federal Decision framework."

In July 2012, Donlin Gold LLC, a joint venture owned equally by Barrick and Novagold, applied for federal permits to develop a mine at its world-class gold project in Southwest Alaska, initiating the need for an environmental impact statement as required under NEPA. The Corps led this effort with 12 cooperating agencies that included the BLM, U.S. Pipeline and Hazardous Materials Safety Administration, U.S. Environmental Protection Agency, U.S. Fish and Wildlife Service, Alaska Department of Natural Resources, and six federally recognized Alaska Native Tribes.

The Corps conducted extensive public comment and review periods leading to the publication of the final environmental impact statement for Donlin in April. This document informed the agencies' decisions to permit Donlin and grant right of way across federal lands to deliver natural gas to the enormous gold project.

"The Corps and BLM in Alaska are pioneering this joint decision to show the public that their federal government can work together and make sound decisions on environmental reviews," Commander Brooks said. "It is a great step forward."

"Timely processing of environmental reviews and authorization decisions for proposed major infrastructure are being achieved as a result of cooperative relationships between federal agencies," Balash added.

Donlin Gold representatives also signed and received the applicable authorizations at the event.

"The permitting process for the Donlin Gold project was very comprehensive and thorough. At various stages of this multi-year undertaking, all stakeholders had multiple opportunities to engage and make meaningful contributions to the final outcome," said Novagold President and CEO Greg Lang. "We would like to extend special gratitude to the Corps, BLM and other cooperating agencies for their successful navigation of this complex process. We would also like to thank Calista Corporation and The Kuskokwim Corporation, our Native Corporation partners, for their unwavering support and commitment to the project."

"As one of the largest undeveloped gold deposits in the world, Donlin Gold represents exceptional optionality within our portfolio," said Barrick VP Krcmarov. "Now, with key permits in hand, we can concentrate on further exploring ways of reducing initial capital and unlocking the value of this asset for all of our partners, in keeping with our deep commitment to community engagement and environmental stewardship."

It is anticipated, however, that the partners will start out with a somewhat smaller operation that focuses on higher-grade portions of the deposit and then scale up to the permitted size in stages.

"One of the opportunities being studied is the ability to mine more selectively, which could improve feed grade," said Lang.

The partners, though, will likely investigate several scenarios to reduce start-up and operation costs as part of their investigation into ways to optimize Donlin. 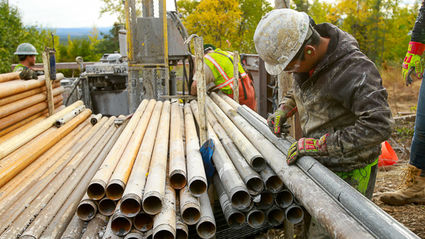 The 2017 drill program at Donlin Gold provided Novagold and Barrick with a better understanding of the mineralization and structures within the targeted zones, information the Donlin partners are using to advance optimization work at this 39-million-ounce gold project in Southwest Alaska.

Lang said, "innovative technologies in logistics and automation, and modular construction techniques to improve efficiencies," are other cost-reducing ideas the Donlin Gold partners are looking into.

As part of the optimization studies, Barrick and Novagold carried out a 16-hole drill program at the project last year.

Novagold and Barrick said the increased understanding of the mineralization and structures targeted with this drilling is providing valuable inputs to advance optimization work.

A formal decision on building a mine at Donlin Gold is not expected until after the optimization work is complete and the results are incorporated into an updated feasibility study for the 39-million-oz gold project.

The partners said they expect to be in a position to provide further details on the path forward for Donlin Gold by the end of 2018.