Ascot Resources Ltd. Aug. 9 reported that drilling has cut high-grade gold mineralization in the Unicorn and Province zones at Big Missouri Ridge, a target about 5,000 meters north of the Premier-Northern Lights area of the company's Premier-Dilworth property about 16 miles (25 kilometers) north of Stewart in the Golden Triangle region of northwestern British Columbia.

Ascot is working towards resuming underground production with the facilities and infrastructure already in place on the Premier property near Stewart, B.C.

The 2018 drill program, which got underway in April, is designed to extend mineralized zones at Premier-Northern Lights; convert current resources from inferred to indicated in existing zones; and to delineate high-grade zones in the Big Missouri-Martha Ellen area about 5,000 meters to the north. The overall purpose of this drilling is to add to the existing resource base to support initial engineering studies that began in June.

"The clustered high-grade intercepts near surface in the Province zone and the new intercepts at Unicorn look very good," said Ascot Resources President and CEO Derek White. "These new results increase our confidence that the resource update for the Premier and Big Missouri areas will establish a sufficient resource base to restart the Premier mill." 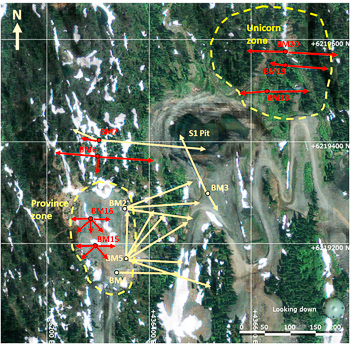 In addition to drilling, Ascot is engaged with several consulting groups to provide all relevant data for permitting and preliminary engineering. Currently there is a hydrogeological drill program in progress that will establish monitoring wells in support of a hydrogeological flow model.

Ascot personnel are in the process of assembling three metallurgical composites for test work to confirm historical parameters such as hardness and gold recovery. Process optimization appears to be possible in a variety of areas and will be investigated further.

Additional work is underway in the areas of underground mine design and the refurbishment of the mill.