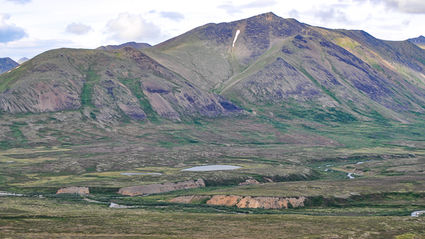 Rivergold's first hole tested Luna, which is located at the red-stained outcrop in the foreground, and the third hole is testing Quicksilver in the mountains behind.

Apart from Kisa, the company said none of the prospects across these properties have previously been drilled, despite having outcropping high-grade gold mineralization at several places over a significant strike length.

"We are focusing on the highest priority targets at this stage, starting by drilling underneath the main Luna outcrop where we have multiple high-grade rock chip results, up to 64.7 g/t gold, from a zone of stockwork veins and felsic porphyry dykes within altered sediments," said Riversgold Managing Director Alan Kelly.

The induced polarization geophysical survey completed by Aurora Geosciences earlier reveals an IP chargeability and resistivity response over at least 400 meters of strike at Luna. This response is shallowest over the main Luna outcrop and appears to increase in depth and strength towards the southwest.

With this year's drilling, Riversgold is testing below the main Luna outcrop, as well as the stronger IP response to the southwest.

The first hole of the program, LQDD001, cut variably altered quartz feldspar porphyry, with disseminated pyrite, from surface to a depth of 107.93.

The second hole tested Luna East, a prospect about 1,000 meters northeast of Luna.

Two styles of mineralization have been identified at Luna East – outcropping quartz-sulfide veins that have returned rock chip samples with up to 3.7 g/t gold with associated silver, arsenic, copper and stibnite (antimony); and large, angular massive sulfide boulders with a significant amount of magnetic pyrrhotite that have returned assays with up to 1.2 percent copper and 90 g/t gold, but generally lower tenor gold results.

The IP survey data does not show an obvious response over the quartz-sulfide veins but has highlighted a chargeability response that appears to be associated with a northwest trending magnetic anomaly broken up by faulting that may be the source of the massive sulfide boulders.

LQDD002, the first hole drilled at Luna East, cut 0.8 meters of quartz-feldspar porphyries from a depth of 18.4 meters and 1.07 meters of abundant coarse-grained disseminated arsenopyrite and minor pyrrhotite and chalcopyrite at 43.89 meters.

Kelly said both sections of mineralization are reminiscent of the rock at Donlin Gold.

"The bulk of gold mineralization at Donlin Creek is hosted within felsic porphyry dikes and is associated with arsenopyrite; similar to what we are seeing in our first drill hole at Luna East. The semi-massive pyrrhotite is also like massive sulphide veins observed at Donlin Creek," he said.

As well as testing beneath the outcropping quartz/sulfide veins, a drill hole is planned to test the magnetic anomaly adjacent to the IP chargeability response.

The hole had to be terminated at 45.57 meters due to the difficult drilling conditions.

The rig has now moved to the Quicksilver target, about 3,000 meters northeast of Luna East, where drilling of LQDD003 has begun.

Rock chip samples from Quicksilver have returned up to 37.6 g/t gold and 58 g/t silver.

Core from LQDD001 has been sent to the lab for analysis, assays are pending. 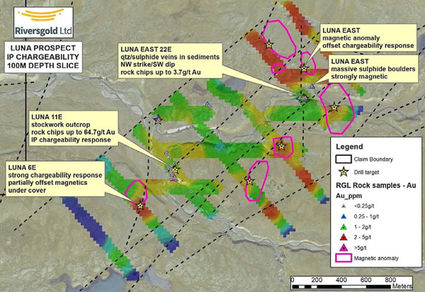