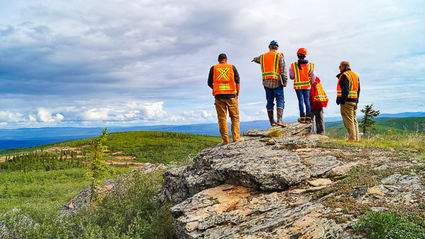 From a vantage above the Main and North Peak skarn deposits, Avalon Development President Curt Freeman provides visitors to Peak Gold an overview of the high-grade gold-silver mineralization identified on the project.

The verdict is in – the economics of developing an open-pit mine at Peak Gold look tantalizing and Royal Gold Inc. is committed to being involved with this Eastern Interior Alaska gold-silver project for the long haul.

Discovered by Contango ORE Inc. in 2009, the Peak Gold project hosts two skarn deposits – Main Peak and North Peak – on an underexplored property that covers roughly 850,000 acres west and south of Tok, a crossroads town on the Alaska Highway.

A preliminary economic assessment published by the Peak Gold joint venture partners – Contango ORE (60 percent) and Royal Gold (40 percent) – outlines plans for a robust open-pit mining operation with attractive economics at US$1,250 per ounce gold and US$17/oz silver, the base case metals prices for the PEA.

"The results of the PEA are a significant milestone and show that the Peak Gold project is one of the most interesting emerging gold projects in the United States," said Royal Gold President and CEO Tony Jensen.

This initial assessment of mining the skarn mineralization in the Main and North Peak deposits envisions an open-pit mine feeding a 3,500-metric-ton-per-day mill. This operation is forecast to produce 1.09 million oz gold and 2 million oz of silver over an initial eight-year mine-life.

Mined from two adjacent open pits, the potential ore for this operation consists of 9.3 million metric tons of skarn material from the Peak deposits averaging 3.99 g/t gold and 11.7 g/t silver.

The after-tax net present value (at a 5 percent discount) of this operation is calculated to be US$393 million and the after-tax internal rate of return is 29.1 percent.

The cost to produce an ounce of gold, based on the initial capital investment, is calculated to be an exceptionally low US$428/oz of gold recovered. With the sustaining capital included, this cost is only US$470/oz gold.

This combination of relatively low development and production costs, coupled with a mine-plan designed to maximize grade in the early years, means it is only expected to take two years to pay back the initial development capital, after taxes.

JDS Energy and Mining Inc., which completed the PEA for Peak Gold, updated a mid-2017 resource estimate with operating costs, pit-slope estimates and metal recoveries consistent with the operation outlined in the assessment.

"This first PEA pertains only to Peak Gold's Main Peak and North Peak resource areas," explained Contango ORE CEO Brad Juneau. "The robust economic returns are a result of the deposit's high-grade, low strip-ratio, shallow depth of the resource, and access to infrastructure."

The PEA considers a conventional truck-and-shovel operation mining this potential ore from two open-pits, starting at North Peak before moving over to a pit to mine the combined Main and West Peak deposits starting in year three.

North Peak hosts about 41 percent of the measured and indicated resource outlined so far. With this mostly oxidized resource averaging 4.35 g/t gold and 23.47 g/t silver, this deposit hosts slightly higher grades than the parallel and mostly sulfide Main Peak deposit.

The strip ratio over the initial eight-year mine life is 3.9 tons of waste for every ton ore fed to the mill.

At this ratio, an average of 15,000 tpd of material would be mined to feed the 3,500 tpd processing plant, which would include a two-stage crushing circuit, a two-stage grinding circuit, and a carbon-in-leach (CIL) circuit.

The tailings from this process would be thickened and pumped into a lined tailings storage facility. The waste-rock would be separated according to its characteristics and stored accordingly.

With the northern side of the Peak Gold property boardering the Alaska Highway just east of Tok, the infrastructure needs to support a mine developed there are minimal.

You can already drive to the Peak deposits over a six-mile road from the Alaska Highway. While this road would need to be upgraded to handle the heavy loads of building and operating the mine, there are not many potential mine projects in Alaska so close to a paved highway.

Much of the mine's workforce is expected to come from local communities. Contango ORE has long been committed to hiring locally as much as possible, especially from the village of Tetlin, which owns the original 675,000-acre land package that hosts the Peak Gold deposits. Tok, the largest town in the region, and surrounding villages also could contribute some of the workers needed at a future Peak Gold Mine.

For workers coming from outside the region, the PEA contemplates camp accommodations in Tok.

Getting commercial, grid-power to the project would involve running a power line from Delta Junction, which lies along the Alaska Highway about 100 miles to the west.

The remaining infrastructure would be the haul roads; buildings; processing facility; tailings facility; fuel and explosive storage; and other facilities that any similar mine would need.

While this first draft of the mine plan produces robust economics, the PEA points out several opportunities to potentially enhance the operation.

One of the easiest and most obvious of these opportunities is to bring additional resource into the mine-plan, something the Peak Gold partners have already begun working on.

Given the geochemical and geophysical indicators identified near the Peak zones and across the wider property, the 675,000 acres of land leased from Tetlin Village and 175,000 acres of state mining claims held by Peak Gold is highly prospective for additional skarn deposits, as well as other styles of precious and base metals mineralization.

"Establishing an economic project in the Peak area is a great start to realizing the ultimate value of Peak Gold's assets, which include a large acreage position outside of the Peak area with significant exploration potential," Contango ORE CEO Juneau said.

Another obvious choice for squeezing more value out of the resources already identified would be to add a circuit to recover some of the 35.5 million lb of copper in the Peak deposits to the processing plant.

There is also the potential of lowering the nearly 4-to-1 strip-ratio by steepening the pit slopes to angles that more closely fit the skarn bodies being mined.

These potential upgrades would likely be considered in a pre-feasibility study, if Contango ORE and Royal Gold decide to advance the project to this next level of engineering and economic consideration.

Committed to the long term

Given the Peak Gold partners' excitement about the PEA, it is safe to assume they are eager to grow and advance this project toward development.

"Royal Gold is committed to this exciting project over the long term and will focus on opportunities to realize the value of our interest in a manner more closely aligned with our core business model," said Royal Gold CEO Jensen.

This core business model involves exposure to precious metals through ownership of royalties on mines operated by other companies, not getting directly involved the exploration, development and operations.

In fact, this is one of the many unique facets of the Peak Gold project.

"(I)n my tenure here, we haven't been attracted to do any exploration ourselves," Royal Gold Vice President of Development and Operations Bill Heissenbuttel said in 2016.

Despite not usually getting directly involved in mineral exploration, Royal Gold has invested US$30 million to earn a 40 percent JV interest in Peak Gold and is continuing to manage further exploration on the property this year.

While this direct interest in an exploration project is atypical for the company that steadfastly sticks to acquiring precious metal royalties, purchasing a significant stake in a gold exploration company is even further outside Royal Gold's modus operandi.

In an April filing to the U.S. Securities Exchange Commission, however, the royalty company reported that it bought 809,744 shares of Contango ORE at US$26 per share, roughly a 40 percent premium to the price of the exploration companies shares at the time.

Bought on the open market from a substantial Contango ORE shareholder, this acquisition gives Royal Gold at least a 13.2 percent stake in Contango ORE and further consolidates the already limited number of shares available. 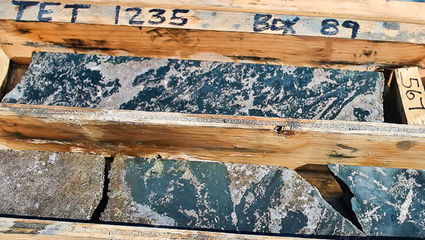 This core is from a 4.5-meter section of skarn mineralization drilled at Peak Gold in 2012 that averaged 68 grams per metric ton gold, 10 g/t silver and 0.36 percent copper.

In addition to its direct ownership, Royal Gold holds a 3 percent net smelter return royalty on mineral production from mining at Peak Gold.

Considering the robust economics of the Peak Gold PEA, it is not hard to imagine that Royal Gold can leverage its 40 percent ownership of the project and significant interest in Contango ORE toward the Denver-based royalty company's goal of more closely aligning its interests to its core business model when a mining company decides it wants buy into this exciting gold project in eastern Alaska.

More background on the Peak Gold partners and their 2018 exploration program is available in Extraordinary Peak Gold, published in the May 2018 edition of North of 60 Mining News.