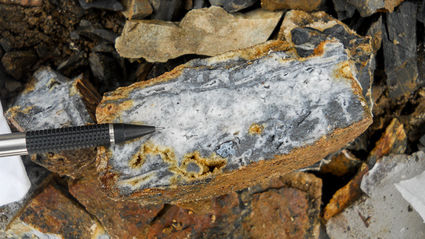 Rock chip samples collected from Midway contained up to 11.65 g/t gold with associated silver, arsenic and stibnite (antimony), metals indicative of the style of mineralization Riversgold is seeking on its Southwest Alaska properties.

Riversgold Ltd. Oct. 8 reported that it has staked a block of new state mining claims to cover high-grade gold the Australian exploration company has identified between its Quicksilver and Gemuk Mountain gold targets in Southwest Alaska.

Known as Midway, this new property covers a section of the North Fork Fault immediately northeast of the company's Luna-Quicksilver property.

Results from rock chip samples collected from outcrop at Midway returned assay with up to 11.65 grams per metric ton gold with associated silver, arsenic and stibnite (antimony), metals indicative of the style of mineralization Riversgold is seeking on its Southwest Alaska properties.

Riversgold Managing Director Allan Kelly said these results reaffirm both the importance of the North Fork Fault as a focus for high-grade gold mineralization and the prospectivity of the company's land position along this fault.

"We have now identified at least six high-grade gold occurrences along the structure, including this new style of mineralization at Midway," he said.

These high-grade gold occurrences span nearly 25 miles (40 kilometers) of the North Fork Fault, from Luna-Quicksilver on the southwest end to Gemuk Mountain to the northeast.

"The North Fork and Pluton faults are obviously very important regional structures which could host significant gold mineralization, and we are looking forward to further exploration in 2019," Kelly added.

Riversgold's properties in the area also include Kisa, a gold enriched land package about nine miles (15 kilometers) south of Luna-Quicksilver.

In addition to the vein discoveries at Midway, Riversgold said sampling at Quicksilver, Gemuk and Kisa confirm the high-grade gold potential on its Alaska properties.

Riversgold staked the claims at Geumk early this year to cover an area at the northeast end of the North Fork Fault where historical sampling has returned as much as 100 g/t gold.

This summer, the company carried out systematic rock and chip sampling, as well as ridge and spur sampling at Gemuk.

Riversgold said this sampling, focused on the Pluton Fault, has confirmed high-grade gold and antimony results obtained during historical sampling carried out in 1976 and 2005.

The sampling also identified a potential gold target to the south of the Pluton Fault.

The current sampling and historical geophysical data are too coarse to confirm a relationship between anomalous gold and antimony samples from this area.

Further sampling and airborne magnetic geophysical surveys over this area are being considered for the 2019 program.

When combined with historical sampling, including 8.7 g/t gold collected downslope of the vein sampled, the area of high-grade gold mineralization associated with the massive sulfide veins now covers approximately 1,000 by 500 meters.

Recent soil sampling also shows a 200-meter-long zone of anomalous gold in soils on the ridgeline just east of the outcropping veins that has had no rock chip samples taken within it.

"We have now proved the existence of multiple sulfide veins at the main Quicksilver target with remarkably consistent high-grade gold results over a wide area," said Kelly. "Significantly, drill hole LQDD0003, which was designed to test below these outcropping sulfide veins, intersected six zones of arsenopyrite mineralization down to approximately 100 meters below surface, including several veins which do not outcrop at surface."

Reconnaissance mapping and sampling carried out at Golden Dyke, a 4,000-meter-long swarm of quartz-feldspar dykes that outcrop along a north-south ridgeline on the Kisa property also returned promising gold results.

Samples collected along a 500-meter stretch of Golden Dyke ranged between two and three g/t gold, along with anomalous silver, arsenic, copper and stibnite.

The highest gold result from this sampling returned 12.15 g/t gold.

"Even though we had a modest budget and limited field work program this year, we have outlined several new areas of outcropping high-grade gold mineralization, including at Kisa," said the Riversgold managing director. 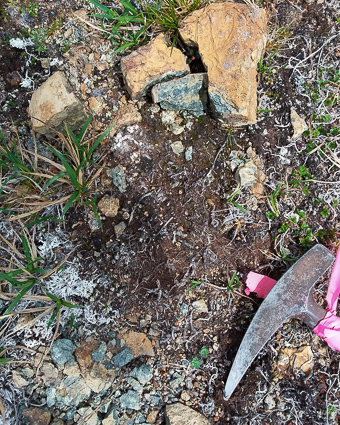 "We have only looked at a small area of the entire claim block and have already outlined multiple mineralised dykes over at least 600 meters of strike," he added.

Riversgold attempted to test this target during the 2018 field season from an existing drill platform but was hampered due to poor weather and mechanical issues with the heli-portable drill rig.

Given the encouraging sampling results, the company plans to conduct further rock chip sampling, along with systematic surface geochemical sampling, to assist in refining targets for drilling when the Australian explorer returns to its Southwest Alaska gold properties in 2019.

Assay results from the 2018 drilling at Quicksilver, Luna and Luna East are pending.