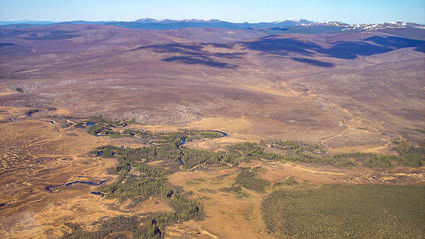 Alaska Division of Geological & Geophysical Surveys completed mapping and sampling of the Northeast Tanacross project, an area of eastern Alaska with little outcrop.

From June 19 through July 15, 2018, geologists from the Alaska Division of Geological & Geophysical Surveys (DGGS) carried out a geologic mapping and geochemical sampling project in the Northeast Tanacross map area – Tanacross D-1 and parts of C-1 and D-2 quadrangles – adjacent to the Fortymile Mining District just west of the Alaska-Yukon border. This area lies in the Yukon-Tanana terrane on the boundary between the Fortymile and Lake George assemblages. It encompasses well-documented porphyry copper-molybdenum-gold deposits, including Taurus, Fishhook (also known as SW Pika) and Pika Canyon.

Previously available geologic maps include a 1:250,000 scale reconnaissance geologic map and a slightly modified map published by the United States Geological Survey in 2015. New DGGS mapping will provide detailed geologic context for the known porphyry systems in the map area and links to mineral occurrences elsewhere in the region, including structural detail linking the porphyries to mineral occurrences in western Yukon, Canada.

DGGS said much more geologic complexity is documented in geologic maps it published for the adjacent Eagle A-1 and A-2 quadrangles in 2001 and 2002, as well as in DGGS geophysical surveys completed in 2011. This relative lack of mapping in the Tanacross quadrangles led DGGS to conduct detailed mapping and geochemical sampling in this area. DGGS was further prompted to work in the area by historical and current industry interest in the mineralized areas.

Highlights of this DGGS Northeast Tanacross geochemical report include identification, sampling, and characterization of the Taurus and Bluff prospects. This dataset has 20 samples with gold in excess of 0.1 parts per million (0.1 grams per metric ton) in several different locations, including a sample collected north of Taurus West (18MBW082) with 2.67 ppm gold, a sample of drill core from the Bluff prospect (18RN373) with 1.2 ppm gold, and 17 samples with 0.1 to 0.327 ppm gold in drill cores from the Taurus prospect.

Additionally, two samples with over 50 ppm silver (18ET102 and 18ET307) were collected between the Pika Canyon and Fishhook prospects.

The DGGS map area includes a section of Mississippian to Devonian metasedimentary and metavolcanic rocks as well as Jurassic to Tertiary intrusive and volcanic rocks. Major- and trace-element geochemistry was analyzed for metamorphic rocks to distinguish between igneous and sedimentary protoliths, and for igneous rocks to characterize and differentiate Mesozoic and Cenozoic magmatic events in the area.

The analytical data tables associated with this report are available in digital format as comma-separated value (CSV) files. Additional details about the organization of information are noted in the accompanying metadata file. All files can be downloaded from the DGGS website http://doi.org/10.14509/30113.

All the samples collected during this project, as well as laboratory sample rejects and pulps, will be stored at DGGS for the duration of the project and will be available for public viewing upon request. Once the project concludes, the samples and the pulps will be turned over to the DGGS Geological Materials Center in Anchorage.