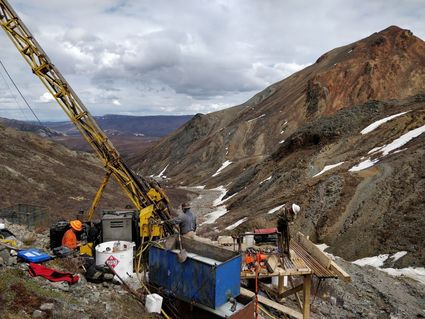 White Rock's 2018 program at Red Mountain included drilling that confirmed and expanded upon the exceptional zinc-lead-silver mineralization in the Dry Creek deposit.

White Rock Minerals Nov. 21 announced that it has staked 524 state of Alaska mining claims around Red Mountain, more than tripling the Australian company's land position at this high-grade zinc-silver-lead-gold-copper volcanogenic massive sulfide project on the north slopes of the Alaska Range.

In addition to successfully tapping high-grade VMS mineralization with drilling, the 2018 program included geophysics and reconnaissance mapping and sampling that identified numerous other prospects across the 35,340 acres of state mining claims the company held at that time.

The culmination of this work has encouraged White Rock to expand its strategic land holding to approximately 117,380 acres in order to cover more of the highly prospective geological setting identified through this summer's work.

White Rock said its decision to secure the additional prospective areas was carried out after consulting with its strategic partner, Sandfire Resources NL.

In July, Sandfire invested AU$2.5 million in 2018 to acquire roughly 14.2 percent interest in White Rock, part of a deal that gives the mid-tier Australian mining company an option to earn up to a 90 percent stake in Red Mountain by investing AU$30 million into this high-grade VMS project and then funding a feasibility study.

"Our successful first year of exploration on the ground at Red Mountain and the subsequent attraction of our strategic partner Sandfire has allowed White Rock to enact a much broader exploration and discovery vision by securing what we believe to be a regionally extensive and highly prospective land package," said White Rock Minerals CEO Matt Gill.

Most of the new claims staked by White Rock surround the previous land package, extending the Red Mountain project over a larger area of the Bonnifield Mining District. Most of this expansion is to the west along strike and south into the prospective footwall stratigraphy that the exploration company has identified as containing multiple prospective VMS horizons. This expanded area will allow White Rock to systematically explore what is now held to be a highly prospective regional stratigraphic setting capable of hosting multiple high-grade zinc-rich polymetallic VMS deposits.

In addition to the claims staked immediately adjacent to Red Mountain, the company staked small blocks of claims over several VMS mineral occurrences within 10 miles of the property. These outlying prospects – Anderson Mountain, Virginia Creek, West Fork, Peaches, Keevy Peak, Kenny, Sheep Creek and Surprise Creek – were identified with past exploration, including some drilling.

• Sheep Creek and Surprise Creek are adjacent prospects about five miles west of Red Mountain that were also discovered by RAA, Getty and Phelps Dodge in 1975. Mineralization at Sheep-Surprise is distinct from the other VMS prospects in the district as it is sediment-hosted with no clear volcanic affinity. These prospects also have significant concentrations of tin and indium. Selected samples collected in 1994 returned up to 11 percent combined zinc and lead, 10 g/t silver and 1 percent tin from massive sulfide lenses within more broadly disseminated sphalerite-galena-cassiterite (zinc, lead and tin minerals) mineralization.

• The West Fork prospect, located about 4.5 miles northeast of Cirque, was discovered by RAA, Getty and Phelps Dodge in 1976 and further explored by Grayd in 1998. Massive sulfide mineralization at surface returned rock chip assay results up to 12.3 percent zinc, 5.4 percent lead, 93 g/t silver and 1.4 percent copper.

These outlying prospects, coupled with the known high-grade VMS deposits and prospects on the expanded Red Mountain property, White Rock has a lot of zinc-rich targets to explore across this mineral-rich section of Interior Alaska.