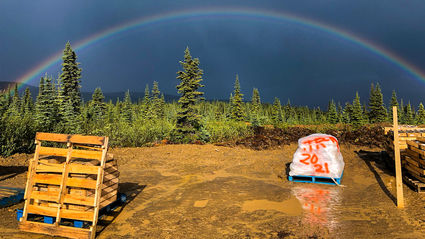 A rainbow arcs over Nugget, a gold zone that hosts the second largest known intrusive body on the Dublin Gulch property.

Victoria Gold Corp. Dec. 3 reported that its 2018 drill program has discovered another gold zone at Dublin Gulch, the expansive Yukon property that hosts the Eagle Gold Mine project.

Victoria is currently developing an open-pit, heap-leach operation at Eagle Gold that is expected to average roughly 200,000 ounces of gold annually over a 10-year mine life from 116 million metric tons of reserves averaging 0.67 grams per metric ton (2.66 million oz) gold.

The construction of this mine is around 60 percent complete and is on pace to begin producing gold in the second quarter of 2019.

While pouring the first gold at this mine next year is the primary objective, Victoria continues to deploy crews to investigate the property's wider potential.

This year's exploration of the Dublin Gulch property included nearly 5,400 meters of drilling, more than 4,000 meters of trenching and the collection of approximately 8,500 soil samples.

"In total, eight drill holes were collared in the Nugget Zone this year, with three at the newly discovered Raven target," said McConnell.

"To produce this tenor of mineralization from a first-pass drill program is truly impressive and a testament to both the mineral endowment of Dublin Gulch and the validity of the Potato Hills Trend model," the Victoria Gold CEO added.

In addition to the exploration at Nugget, Victoria Gold drilled 11 holes and dug eight trenches at Spinach, a zone about 3,500 meters northeast of the Eagle Gold deposit and adjacent to the Olive-Shamrock zone; and 10 holes and 16 trenches at Bluto, a target about 3,000 meters east of Spinach.

In the meantime, a 450-person crew works to complete construction of the roughly 200,000 oz/yr Eagle Mine.

Earthworks for this operation are essentially complete; concrete works are 93 percent finished; and the raising of structural steel is 32 percent complete.

Victoria Gold plans to begin commissioning the new open-pit, heap-leach mine in the second quarter of next year.

"This is an exciting time for the company and its shareholders, as Yukon's next operating mine comes into production in 2019, and we intend to continue to demonstrate that Dublin Gulch has much more to offer beyond the Eagle Gold deposit," said McConnell.

A new resource estimate published on Dec. 5 shows that the Eagle Mine itself also has more to offer. 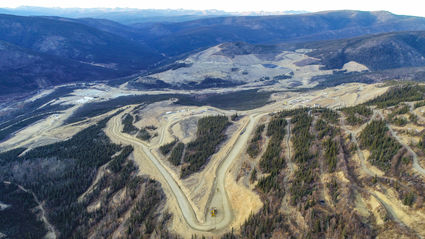 Victoria Gold is currently about 60 percent finished with the development of an open-pit, heap-leach operation at Eagle Gold that is expected to average roughly 200,000 ounces of gold annually over a 10-year mine life.

"The additional drilling at Eagle has converted inferred oz to indicated oz, increased overall measured and indicated oz and maintained grade, which resulted in an additional 450,000 oz gold before mining has begun," McConnell said.

The updated resource is for the immediate Eagle Mine area only and does not include the 9.5 million metric tons of measured and indicated resource averaging 1.08 g/t (329,000 oz) gold in the Olive-Shamrock area. This Olive-Shamrock resource, which is included in the 2016 mine-plan, remains unchanged.

Victoria Gold intends to prepare an updated resource for the Olive-Shamrock Deposit once all 2018 drill results have been received.