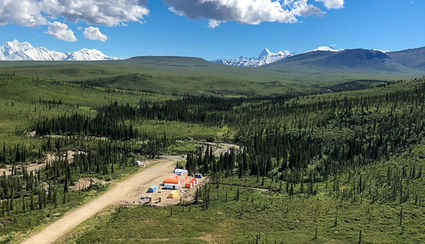 In July, White Rock entered into a strategic relationship with Sandfire, a mid-tier Australian mining company that operates the high-grade DeGrussa copper-gold mine in Western Australia.

To formalize this strategic relationship between the two Australian companies, Sandfire aquired 208.33 million White Rock shares at AU1.2 cents per share, for a total of AU$2.5 million. This per-share price was a 41 percent premium over the one-month volume-weighted-average price of White Rock shares at the time.

This initial investment in White Rock provided Sandfire an exclusive option to enter into an earn-in joint venture agreement in Red Mountain, which is exercisable until the end of the year.

While the details of the joint venture agreement are currently being negotiated, the principles agreed upon by the companies would have Sandfire earning up to a 90 percent interest in Red Mountain by investing AU$30 million into the expansive base and precious metals project and then funding a feasibility study.

This would be a four-stage investment.

• Sandfire would fund AU$20 million over the first four years to earn a 51 percent interest in Red Mountain, including at least AU$6 million during the first year;

• a further AU$10 million and deliver a pre-feasibility study over an additional two years to earn 70 percent;

• Sandfire could increase its ownership to 80 percent by fully funding a feasibility study – White Rock has the option to contribute to this third phase; and

• White Rock also has the option to contribute to the fourth phase – if not, Sandfire's ownership would increase to 90 percent and White Rock's 10 percent interest would be earned from cash flow from mining operations at Red Mountain.

Under the agreed upon principles, White Rock would continue managing the project for at least the first year of the earn-in and to be paid a management fee equal to 10 percent above all project expenses, with half of the fee to be paid on signing of the JV agreement and the balance to be paid in three equal instalments on a quarterly basis.

Ongoing management of Red Mountain will be subject to annual review and after the first year will be at Sandfire's election.

White Rock said this joint venture will enable the junior to benefit from Sandfire's significant technical expertise to develop the Red Mountain Project, as well as further strategic support as it moves to unlock the potential from its large strategic land holding.

"White Rock welcomes Sandfire as a joint venture partner that shares White Rock's vision for the exploration and development of the Red Mountain project," said White Rock Minerals CEO Matt Gill. "Securing a high-quality partner with world leading expertise in the exploration and development of base metals projects is a strong endorsement to the quality and potential of White Rock's globally significant high-grade zinc VMS Red Mountain project."

White Rock and Sandfire plan to have the details of the JV hammered out within three months, ahead of the 2019 summer field season in Alaska.

White Rock's first year of exploration at Red Mountain was a resounding success, a program that upgraded and expanded the high-grade zinc-silver-lead-gold-copper mineralization at two historical deposits – Dry Creek and West Tundra Flats –and made new VMS discoveries on the property about 60 miles (100 kilometers) south of Fairbanks.

Utilizing more than 120 holes historically drilled at Dry Creek and West Tundra Flats, White Mountain had a resource calculated in 2017 that meets the standards of the Australian Joint Ore Reserves Committee.

White Rock got off to an early start to the 2018 Alaska exploration season by launching a drill campaign in May focused on upgrading and expanding the two known deposits and investigating Red Mountain's district potential.

Being outside of the current resource area at Dry Creek makes the high-grades even more exceptional and highlights the potential of enlarging both the grade and size of the deposit.

As drills expanded Dry Creek and WTF, crews carried out geophysical surveys, mapping and sampling across the VMS deposits to determine the best exploration tools to use to prioritize the 30 earlier staged prospects across the wider Red Mountain property.

This orientation work found that highly conductive anomalies were easily and economically identifiable with controlled-source audio-frequency magnetotellurics, or CSAMT, geophysics.

"The stark conductivity anomaly results seen and their coincidence with known massive sulfide mineralization gives White Rock a powerful exploration tool with which to identify new targets for drill testing, hopefully leading to resource expansion and the discovery of new deposits," said Gill.

Hunter was the first major discovery of the 2018 reconnaissance exploration program at Red Mountain.

While mapping and sampling an area about 5,200 meters southeast of Dry Creek, crews identified a two-foot massive sulfide outcrop rich in sphalerite (zinc mineralization) and galena (lead mineralization) at Hunter.

The geophysics and reconnaissance mapping and sampling carried out during the 2018 field season encouraged White Rock to expand its strategic land holding to roughly 475 square kilometers (183 square miles) by staking state of Alaska mining claims over more of the highly prospective geological setting identified.

"Our successful first year of exploration on the ground at Red Mountain and the subsequent attraction of our strategic partner Sandfire has allowed White Rock to enact a much broader exploration and discovery vision by securing what we believe to be a regionally extensive and highly prospective land package," said Gill.

Most of the new claims staked by White Rock surround the previous land package, extending the Red Mountain project over a larger area of the Bonnifield Mining District. Most of this expansion is to the west along strike and south into the prospective footwall stratigraphy that the exploration company has identified as containing multiple prospective VMS horizons. This expanded area will allow White Rock to systematically explore what is now held to be a highly prospective regional stratigraphic setting capable of hosting multiple high-grade zinc-rich polymetallic VMS deposits.

In addition to the claims staked immediately adjacent to Red Mountain, the company staked small blocks of claims over several VMS mineral occurrences within 10 miles of the property.

For more detailed information on these claims and the prospects they cover, read Larger discovery vision at Red Mountain, published in the Nov. 23 edition of North of 60 Mining News.