Teck to up its stake in Fireweed Zinc 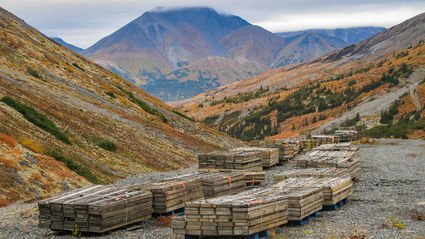 Teck, which already holds a 4.7 percent interest in Fireweed, will up its holdings in the Yukon zinc explorer to around 9.9 percent.

"Fireweed is delighted to see Teck grow their stake in the company to just shy of 10 percent," said Fireweed CEO Brandon Macdonald. "This is a strong vote of confidence in the project and management from one of the world's preeminent zinc miners."

Fireweed Zinc emerged on the mineral exploration scene in 2017 with the completion of a C$4 million initial public offering and an option to acquire Macmillan Pass, a property that blanketed 5,159 hectares (12,748 acres) of the zinc-rich Selwyn Basin.

Over the past two seasons, the company has updated and expanded a historical resource for Jason and Tom, the most advanced deposits on the property, and has expanded the property to cover most of the Macmillan Pass zinc district in eastern Yukon.

A preliminary economic assessment completed in May outlined a 4,900-metric-ton-per-day mill at Macmillan Pass that would produce 3.4 billion lb of zinc, 1.9 billion lb of lead and 37.2 million oz of silver over an 18-year mine life.

This project shows the potential for robust economics, including an after-tax net present value (8 percent discount) of C$448 million and internal rate of return of 24 percent.

The PEA does not include results from a robust 2018 drill program that included expanding the resource considered in the assessment and testing other zinc targets on the property.

In addition to a robust exploration program, Fireweed exercised its option to gain full ownership of the original Tom and Jason claims and consolidated the Macmillan Pass Zinc District with the purchase and options on several blocks of adjacent claims, including a claim block the company acquired from Teck.

As a result of these deals, Fireweed expanded its land holdings in the district to 544 square kilometers (210 square miles).

Macdonald told Mining News that Fireweed Zinc does not plan to update the resource or advance the project to prefeasibility study until after the company has a better idea of the larger resource potential on the expanded property.

This year's exploration program will continue to investigate the larger potential at Macmillan Pass.

"So, 2019 will focus on regional exploration and some bold step-outs of known zones so we can get a better sense of the total scale of mineralization of the district," Macdonald told Mining News. "That would allow us to better plan out a path to a global resource for the district and a mine plan that reflects all the mineralized zones."

Teck has agreed to purchase the 2,187,500 regular shares offered by Fireweed.

"We made significant progress on Macmillan Pass in 2018 and this new financing will help make 2019 another great year for the company," said Macdonald.