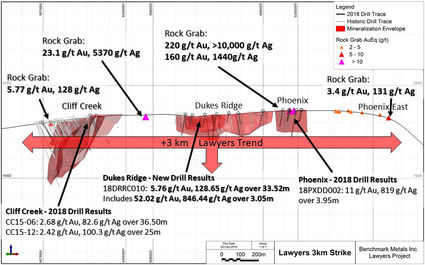 Located about 45 kilometers (28 miles) northwest of the Kemess copper-gold mine project, Lawyers is home to a small underground mine that produced 171,200 ounces of gold and 3.6 million oz of silver over a four-year period beginning in 1989.

"The new drill results provide bulk tonnage drill intercepts that envelope high-grade gold-silver veins from surface. These results will significantly expand the overall size of the Dukes Ridge Zone that remains open for additional step-out drilling in 2019," said Benchmark Minerals CEO John Williamson. "This, in combination with results of previous and planned drilling at the Cliff Creek, Dukes Ridge and Phoenix mineralized zones, is leading to a significant increase in the existing estimate of mineral resources at the Lawyers project."

Benchmark said there are geological indicators of the potential to extend Dukes Ridge up to 600 meters northwest to the Cliff Creek zone, where drilling in 2015 cut 36.5 meters of 2.68 g/t gold and 36.5 g/t silver. A grab sample collected about halfway between Dukes Ridge and Cliff Creek contained 23.1 g/t gold and 5,370 g/t silver.

In addition to expanding Dukes Ridge to the northwest, Benchmark said the zone has potential for a 100-meter southeastern extension connecting it with the Phoenix zone, where one hole drilled last year cut 3.95 meters of 11 g/t gold and 819 g/t silver. In turn, Phoenix is open to expansion for at least 600 meters further southeast where several grab samples returned robust mineralization, including one sample with 3.4 g/t gold and 131 g/t silver.

"Previously described as discreet mineralized zones, evidence is growing to suggest that these zones may be interconnected with continuous mineralization over a plus-three-kilometer strike length, representing the heart of a mineral resource with significant potential for expansion along the major northwest-southeast oriented Lawyers Trend," Williamson said.