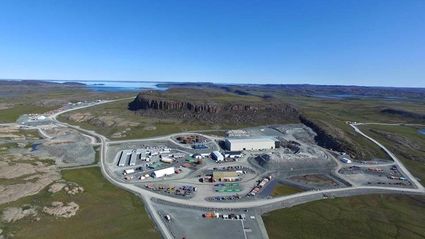 Looking north over the Doris gold mine and mill facilities at TMAC Resources' Hope Bay project in Nunavut.

TMAC Resources Inc. Feb. 21 announced that its Doris Mine on its Hope Bay property in Nunavut achieved record gold production of 34,080 ounces during the fourth quarter.

Building on the improvements achieved in the third quarter, the processing plant processed 164,900 metric tons of ore, or about 1,800 metric tons per day, with a grade of 7.8 grams per metric ton gold and achieved an average recovery of 82 percent during the three months ended Dec. 31.

The Doris Bay mine started off with a 1,000-metric-ton-per-day gold recovery circuit and in mid-2018 added a second circuit to double the capacity of the operation. TMAC is currently focused on getting these circuits running at full capacity and at around 90 percent gold recovery.

During January of this year, the mill processed 45,400 tonnes of ore averaging 9.9 g/t gold and 82 percent recovery. While the average rate for the month was only 1,470 metric tons per day, the plant was down six of those days due to unplanned maintenance and compounded by a short period of extreme cold weather that was more severe than typical or previously experienced by TMAC.

Excluding the unplanned maintenance downtime, the plant operated at approximately 1,750 metric tons per day. The gold recovery rates remained at 82 percent, with the highest recovery during the month topping out 87 percent.

"The ramp up of the plant and mine is not completed, but we are most of the way there now," said Neal. "TMAC ended the year with a substantially better developed Doris mine that contributes to further ramp up, significant plant retrofits that enable our targeted recoveries of at least 90 percent and throughput of at least 2,000 tonnes per day, permitting that allows us to begin developing Madrid and Boston, and an operating team capable of executing on our growth plans."

In January, the Minister of Intergovernmental and Northern Affairs and Internal Trade approved two water licenses as recommended by the Nunavut Water Board in December. This is the final step in the environmental permitting process for both Madrid, a deposit about seven kilometers (4.3 miles) south of the mill, and Boston, a project about 60 kilometers (37 miles) south.

TMAC Resources' primary objective of achieving efficient operations at the mills full capacity will be bolstered by an increased number of mining zones during 2019.

This is a drop of 193,000 oz of gold since mid-2017, the last time resources and reserves were calculated for Hope Bay. This decrease is due to ore processed through the mill, as well as depletions resulting from remodeling of the deposit, partially offset by increases from drilling.

In addition to numerous zones in the Doris mine area – Doris North, Doris North BTD, Doris Connector and Doris Central – TMAC will begin mining from surface the Naartok East crown pillar, a Madrid deposit that hosts 283,000 metric tons of probable mineral reserve averaging 4.8 g/t (43,900 oz) gold from surface to a depth of 50 meters. Roughly 175,000 metric tons of this reserve is expected to be mined in 2019 and the balance in 2020.

"It is important in our planning to both drive ramp up at the Doris mine while also having insurance for operational volatility, which is provided by stockpiles and the Naartok East crown pillar," said Neal.

TMAC said the established stockpiles and availability of ore from the Naartok East crown pillar provide additional flexibility in feeding the plant in 2019 as insurance to the ramp up of underground mining at Doris.

TMAC also has an opportunity to begin development of an underground portal at Madrid North that would produce ore from sill development roughly one year after development starts.

The Madrid North contains 10.82 million metric tons of probable reserve averaging 6.2 g/t (2.17 million oz) gold and Combined, the reserves in the Madrid deposits increased by 378,000 oz as a result of new drilling, improved resource modelling of the deposits and updated mining parameters used to convert resources to reserves.

Plant feed in 2019 from the Doris mine is expected to be supplemented with stockpile material during the first half of the year and with material from Naartok East crown pillar surface mining in the second half of the year. The primary and secondary stockpiles as at December 31, 2018 are the equivalent of approximately 330 tpd of available feed over the course of the year, or approximately 570 tpd of available feed over the approximate seven months prior to ore production from the Naartok East crown pillar reaching the Plant.

The company plans to reverse this trend with a substantial drill program for 2019.

"Importantly, we are exploring the Hope Bay Belt again with at least C$20 million in expenditures to extend Doris, ready Madrid North for development, increase Boston reserves and resources and begin evaluating the most prospective and proximate to infrastructure of our more than 90 identified regional targets," said Neal.

To accomplish this, the company plans to complete 60,000 meters of drilling across the Hope Bay belt.

TMAC has set targets to grow reserves and resources at Doris, especially at Doris North BTD, in the near term. This drilling will be supported by continued development of the Doris North BTD exploration ramp to the north, which will provide underground access to a further 100 meters of strike length in 2019.

Drilling at Madrid North will focus on advancing the deposits found there toward development and production drilling, which includes a winter program at Suluk and a near-surface drilling program at Naartok East.

TMAC will also be re-initiating its Boston exploration program this summer and will follow with a defined winter program.

The regional exploration will be focused on established targets that are in the proximity to existing and planned infrastructure on the property.

"By the end of 2019 we expect to publish a revised prefeasibility study for the development of Hope Bay which will incorporate the ongoing evaluation of the best risk-adjusted plan for generating stakeholder value," said Neal.