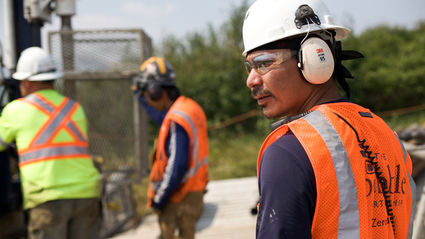 Pebble provided jobs for many Bristol Bay residents during the roughly two decades of exploration at the enormous copper deposit. Many people living closest to the mine hope new jobs will arise from a future mine there.

By this time next year, Pebble Partnership could be holding the first of dozens of permits it will need to begin developing a mine at its enormous copper-gold-molybdenum deposit in Southwest Alaska, according to Sheila Newman, deputy chief of the regulatory division, U.S. Army Corps of Engineers – Alaska District.

The timing or issuance of permits, however, are not guaranteed – permitting a large mine in the United States is a long process.

Newman said the testimony being gathered during the public comment period, currently slated to end on May 30, is an integral part of the Corps efforts to complete an environmental impact statement (EIS), a decision-making document required under the United States National Environmental Policy Act, for Pebble.

"The public process is learning about things we don't know and as we learn new things we adjust accordingly," she told reporters ahead of a Corps-hosted Pebble public hearing held at the Dena'ina Center in downtown Anchorage on April 16.

The eight-hour hearing in Anchorage was the final stop on a three-week tour that also included public meetings in seven communities in Southwest Alaska, where the Pebble deposit is located, and one in Homer.

"We have received a lot of heartfelt testimony from a lot of different individuals," Newman said, summarizing the testimony the Corps has collected on Pebble so far.

The Pebble Mine under consideration in the EIS is expected to produce 5.74 billion pounds of copper, 6.4 million ounces of gold, 260 million lb of molybdenum and 32 million oz of silver over a 20-year mine life.

The deposit also hosts palladium, rhenium and tellurium, all of which are considered critical to the United States. The quantities of these metals, however, has not been fully analyzed.

This world-class deposit of base, precious and critical metals, however, is located in a region of Alaska that is also home to a world-class salmon fishery.

This has caused Bristol Bay residents and fisherman to be concerned about the potential affects a mine at Pebble would have on the annual salmon run the Bristol Bay region is known for, apprehensions that were expressed during the public hearings.

"Pebble has to be held to an incredible high standard because if anything goes wrong, there is just so much at stake," said Charlene Roehl, a commercial fisherwoman from Kokhanok, a village on the south shores of Iliamna Lake and about 25 miles southeast of Pebble.

Martha Nielsen, another commercial fisherwoman from Kokhanok sees both the pros and cons of a future Pebble Mine.

"Yes, I am scared of the mine coming through our areas and our important fish, but we need to consider the future for our kids and for them to continue staying in our lands and be productive citizens," she said during a March 27 hearing in Newhalen, a community just a few miles away from the proposed Pebble Mine.

Nielson's testimony lands about midway in a spectrum of comments that range from staunchly for Pebble to adamantly against developing the proposed mine.

Best of both worlds

Concerns such as those expressed by Nielson were a major consideration for the Pebble Partnership, leading the hopeful mine developer to apply for permits for a much smaller operation than previously considered.

"We redesigned our project from the ground up and we changed it with one goal in mind. We wanted to be able stand up when we went into permitting and say to the state of Alaska, 'We listened to the critics, we've responded to the criticisms that we thought were reasonable and we're taking into permitting a project that's different from what we talked about before,'" Pebble Partnership CEO Tom Collier said during a presentation at the April 4 Alaska Resource Development Council breakfast.

Upon receiving Pebble Partnership's application for this environmentally optimized mine, Corps developed a draft EIS that includes the mine, transportation corridor and natural gas pipeline proposed by the Pebble Partnership, and four alternatives.

Alternatives are required under NEPA and in the case of Pebble three of them primarily investigate various access routes that would connect the mine to a port.

The fourth is the no action alternative. This option, which is included in every EIS, would be the default if none of the other choices were considered permittable.

All five alternatives are detailed in the draft EIS the Corps released for public comment on Feb. 20.

For some residents of the Bristol Bay region, the smaller size, environmental safeguards and new transportation route detailed in Pebble Partnership's 20-year mine proposal made a difference.

Kokhanok resident Gwennith Nielsen Angasan said the Pebble's proposed new route, which considers using an ice breaking ferry to transport ore across Lake Iliamna in route to a port on Cook Inlet, is a new idea that allays some of her concerns.

"I was kind of on the fence for a while, but when I heard that the system ... Pebble was thinking about using, was to ferry or cross the lake and have a port down on the west side of Gibraltar River and then truck the ore over to Amakdedori, I thought that was probably the best route to take," Angasan said during an March 26 hearing in her hometown.

"I think it would have less impact on our way of life, and we could have the best of both worlds," she added.

The hope for increased economic activity in the Iliamna Lake area of Bristol Bay, a region where living costs are high due to its remote location, was shared by several who testified during the public hearings in the communities nearest the Pebble project.

Many who commented in support of Pebble sees the potential mine as a way to ensure future generations have the economic means to stay in the area.

Alex Wassillie, an elder from Newhalen, believes jobs at and related to a mine at Pebble would be good for the younger people and future generations in the Lake Iliamna area.

"You know, it's pretty hard to speak up here with everybody around, but I sure would like to have this Pebble Mine going again because it helped lots of people, younger generation to work," he said.

Ethel Adcox, from Iliamna, is hopeful that a more robust economy spurred by a mine at Pebble will entice her four grandchildren to come home someday.

"So, I feel very strongly about hoping for an economy to come in that will give people jobs," she said while expressing her support for the proposed mine.

Dawn Wassillie, whose eldest daughter moved away from her hometown of Naknek to find work, delivered a similar message to Corps on March 27.

"I would love to have all of my children ... move back home with their families and have the job opportunities, I would absolutely love that," she said.

Kokhanok fisherwoman Nielson said the controversy surrounding the mine has stirred up hard feelings between Bristol Bay residents closest to Pebble, who would benefit the most from a mine there, and those further away, who tend to be more against Pebble.

She, however, encouraged all to participate in the planning process.

"If we all work together, either anti and pro, we get all our comments in and say these are the things we need to watch out for, that's what I feel is very important for us to all continue to live here," she said.

This message of providing insight into the Pebble Mine proposal resonates with the very purpose of collecting public testimony on the draft EIS.

"We are hearing a lot of substantive comments that will help ensure the analysis we are doing leads to a very informed decision, which is what the NEPA process is designed to do," Newman said. 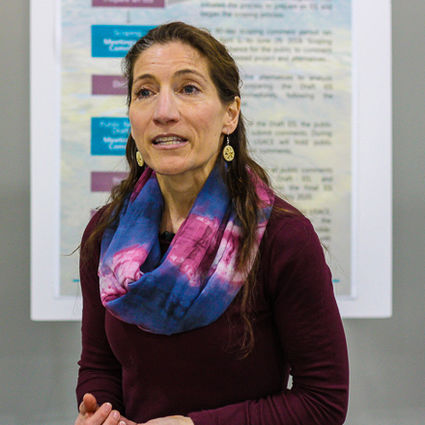 Corps is currently on track to wrap up the public comment period on May 30 and have a final EIS for Pebble completed around January of next year.

"If we identify additional things we need to analyze then that schedule might change," said Newman.

If the current schedule holds, the Corps would likely publish record of decision on Pebble next April, marking the end of the EIS process and the issuance of the first major permits needed to develop a mine at the world-class copper-gold-molybdenum project.