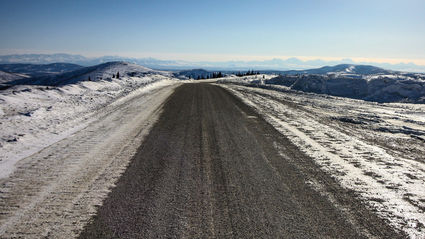 This road to the high-grade Pogo gold mine in Interior Alaska cuts through Millrock Resources' West Pogo claims.

Millrock Resources Inc. April 24 reported that it has staked a large block of claims adjacent to Northern Star Resources Pogo gold mine property in Interior Alaska and has attracted funds to explore Millrock's expanded land package in the Goodpaster Mining District.

"We believe that the Goodpaster District will ultimately prove to be a gold mining camp of significant stature. The area has seen very little exploration despite the obvious potential and proximity to infrastructure," said Millrock Resources President and CEO Greg Beischer. "We have amassed a dominant land position and intend to do our best to discover one or more gold deposits on the claims we have staked."

Prior to staking the new claims, Millrock already owned and optioned 141 state of Alaska mining claims immediately west of the Pogo Mine property. A recent discovery, known as Goodpaster, on the Pogo property has spurred new interest in Millrock's West Pogo claims. The discovery hole at this prospect tapped 6.9 meters averaging 3.2 grams per ton gold and the second cut 5.3 meters of 54.1 g/t gold.

Millrock also staked 403 claims on the east side of the Pogo Mine property.

Together, the East and West Pogo projects cover 27 miles along the Pogo Trend of gold occurrences.

EMX Royalty Corp., which generates royalties through low cost property acquisition and early-stage exploration, provided Millrock with the funding to stake its expanded land package in the Goodpaster District. 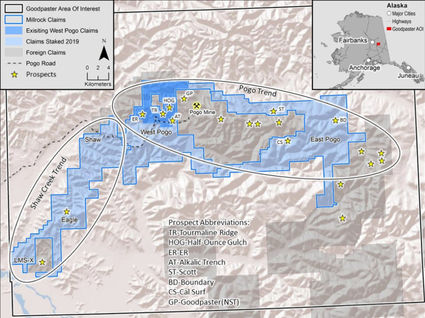 EMX has agreed to invest C$1 million into Millrock through a private placement financing that involves the purchase of 7.14 million units, consisting of one Millrock share and one purchase warrant, at C14 cents per unit. The subscription price represents a significant premium to Millrock's current market price. In return for the premium financing, Millrock has agreed to grant certain royalty interests to EMX.

Millrock Resources and EMX Royalty have agreed that the investment funds will be used in the Goodpaster District.

"We are pleased to collaborate with EMX to maximize our chances of finding gold ore bodies," said Beischer. "There has only been one exploration push in the Goodpaster District since the discovery of Pogo in 1994. It is common in productive gold mining camps that multiple deposits are discovered. So far, there has only been one mine developed in the Goodpaster District."