This graphic depicts the refinery Fortune Minerals plans to build to process concentrates produced at its planned Nico cobalt-gold-bismuth-copper mine in Northwest Territories.

Fortune Minerals Ltd. April 23 reported it has entered into an option to purchase an undisclosed alternative site to construct the proposed refinery that would process metal concentrates from the company's planned Nico cobalt-gold-bismuth-copper mine in Northwest Territories.

In March, Fortune reported that the Rural Municipality of Corman Park near the town of Langham, Saskatchewan had rejected the company's application for rezoning required to construct and operate the facility on property they had acquired there.

With the rezoning at Corman Park in question, Fortune has been in discussions for several months with a number of municipalities that have indicated their interest in having the refinery built in their jurisdictions.

The option agreement was executed for a parcel of lands in a yet to be disclosed location that has already been planned for industrial use and meets the company's infrastructure and services requirements.

Fortune has also been approached by other jurisdictions and agents representing landowners that want to attract the metals refining facility and the jobs and economic benefits it would provide.

It is expected to require 80 to 90 full-time employees to operate the plant, which would result in roughly C$9 million in annual payroll. When you include the indirect jobs, contracting opportunities during construction and operating expenses, this refinery has been estimated to generate C$1 billion in economic activity over the initial 21-year life of the Nico Mine. 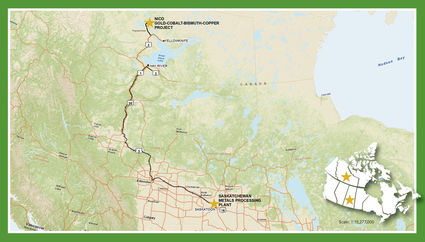 While advancing the municipal approvals required to develop the lands that are now under option, Fortune plans to also evaluating the merits of the other properties that have been presented.

Fortune is also completing an updated technical report for Nico that includes the investigation of selling metal concentrates and gold doré directly from the proposed mine to defer construction of a refinery.

After reviewing the technical report and its various location opportunities for the refinery, Fortune Minerals said it will select the best option for progressing the Nico project.