Says world-class copper resource does not reflect mine plan North of 60 Mining News – May 3, 2019 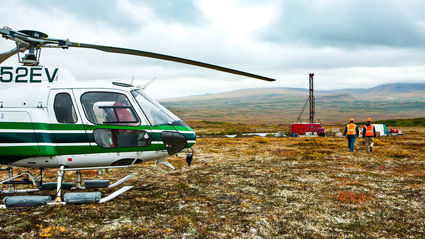 Drilling at Pebble has outlined a world-class deposit that hosts 81.46 billion pounds of copper, 106.37 million ounces of gold, 5.64 billion lb of molybdenum and 515 million oz of silver.

As the Pebble Limited Partnership advances the Pebble copper-gold-molybdenum project through the permitting process, environmental groups opposed to the proposed mine are employing a wide arsenal of tactics to impede the progress.

In its latest volley, Earthworks, an environmental non-governmental organization (ENGO), has requested that the British Columbia Securities Commission (BCSC) and the U.S. Securities and Exchange Commission (SEC) investigate whether Northern Dynasty Minerals Ltd. is misleading investors.

The primary issue Earthworks has asked the Canada and U.S. security commissions to look into is the total Pebble mineral resource reported by Northern Dynasty, which is currently the sole owner of the Pebble Partnership.

These resources have been approved to meet the standards of National Instrument 43-101 (NI 43-101), a strict set of rules that all mining and mineral exploration companies listed on Canadian stock exchanges must follow when reporting resources or reserves.

Earthworks, however, argues that the mine plan currently being permitted for Pebble only accounts for about 11 percent of the resources and will not allow the value of the balance to be fully recognized.

"Northern Dynasty's investor materials promote a 'world-class' 11 billion tonne (metric ton) deposit, but the mine plan under review by the U.S. Army Corps of Engineers will extract only a small fraction of the mineral resource (11 percent)," the ENGO penned in an April 30 press release.

Earthworks contends that the layout of the tailings facility and other mine infrastructure included in the plan the Pebble Partnership is permitting would make the balance of the deposit uneconomic to mine.

At the same time, however, the Washington D.C.-based environmental group is encouraging people opposed to developing a mine at Pebble to send Corps letters suggesting that eventually the remaining 89 percent of the deposit will be mined.

"While Pebble's current application proposes to mine 1.5 billion tons of material over a 20-year mine life, we know the Pebble deposit contains roughly 11 billion tons and that Pebble has repeatedly stated its plans to expand its operations far beyond what it proposes in its current permit application. Reviewing just phase one of the project, unlawfully segments environmental review, shortchanges the public interest, and risks unacceptable impacts to the Bristol Bay region's world-class fisheries," Earthworks wrote in a form-letter it provided for people opposed to Pebble to send to the Corps.

If a company decides it wants to extract the remaining copper, gold and other metals at Pebble, much of which could be mined from underground and not affected by surface infrastructure, it would need to go through the permitting process again.

While Canadian stock exchanges have typically banned mining companies from using words like "world-class" and "generational opportunity" to describe their deposits, there is no question that Pebble hosts one of the richest deposits of copper and gold discovered on Earth by this or any other generation of geologists.

NI 43-101 standards does not allow Northern Dynasty to report the combined total Pebble resource – measured and indicated and inferred – when you do add together these resources, however, the total metal content is unprecedented for a mineral deposit in the predevelopment stage.

The deposit also hosts palladium, rhenium and tellurium, all of which are considered critical to the United States. While the quantities of these metals have not been analyzed in a way that they can reported as resources, the United States Geological Survey recently wrote there is "conjectured to be an enormous tellurium endowment at the Pebble deposit."

Since submitting its plan for permitting early in 2018, Northern Dynasty has been clear that it only intends to mine a fraction of the overall resource identified at Pebble.

The mine under consideration in the EIS is expected to produce 5.74 billion pounds of copper, 6.4 million ounces of gold, 260 million lb of molybdenum and 32 million oz of silver over a 20-year mine life.

This much smaller mine than previously considered was engineered to balance the environmental considerations of developing a mine in an area of Alaska renowned for its salmon fishery and the economics of developing an equally outstanding deposit of copper.

"We redesigned our project from the ground up and we changed it with one goal in mind. We wanted to be able to stand up when we went into permitting and say to the state of Alaska, 'We listened to the critics, we've responded to the criticisms that we thought were reasonable and we're taking into permitting a project that's different from what we talked about before,'" said Pebble Partnership CEO Tom Collier.

David Chambers, a geophysist who often lends his mining experience to Earthworks, claims the Pebble Mine plan is "unrealistic."

In addition to asking SEC and BSCS to investigate the reported Pebble resource and the way Northern Dynasty describes it, Earthworks has requested that the security commissions look into company disclosures related to Bristol Bay Native Corp.'s ownership of subsurface rights along the proposed underground natural gas pipeline that would supply fuel for the proposed mine and its refusal to grant access.

The route for the natural gas pipeline and surface transportation route connecting Pebble to an ocean port is one of the major considerations of the draft EIS put together by the Corp.

In addition to the route Earthworks brought up, the draft EIS considers three alternate access corridors between Pebble and the coast. 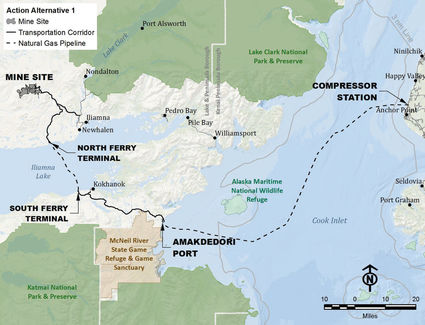 This map from the Pebble draft EIS shows the preferred route for the natural gas pipeline and surface access infrastructure for the proposed copper mine in Southwest Alaska.

The final decision on the route selected will be included in the final EIS, which is expected to be completed early in 2020.

Well, of course the larger deposit(s) will eventually be mined. Pebble is like Prudhoe Bay. It's too big to ignore, it's too important to let it lie idle, and demand is only growing.