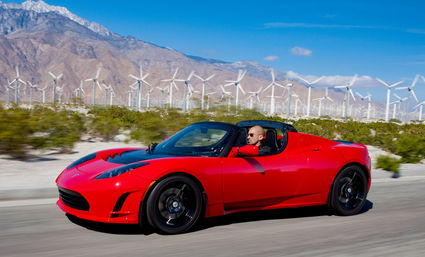 Electric vehicles such as this Tesla Roadster 2.5 and the green energy being generated by the wind turbines require numerous metals now considered critical to the United States.

"Our nation's mineral security is a significant, urgent, and often ignored challenge. Our reliance on China and other nations for critical minerals costs us jobs, weakens our economic competitiveness, and leaves us at a geopolitical disadvantage," Murkowski said.

The U.S. Geological Survey has identified 48 minerals for which the U.S. was reliant on other countries for at least 50 percent of its supply, including 18 for which America is 100 percent import reliant.

Many of these minerals and metals for which America is wholly or largely dependent on other countries also happen to be important commodities for electric vehicle, green energy, high-tech and defense.

"This is our Achilles' heel that serves to empower and enrich other nations, while costing us jobs and international competitiveness," Murkowski, who chairs the Senate Energy and Natural Resources Committee, said during a committee hearing in February.

To address this challenge, Alaska's senior senator has introduced the American Mineral Security Act, or S.1317, which lays out a comprehensive plan for fostering domestic production of minerals considered critical to the United States.

"Our legislation requires common sense steps to begin restoring American independence regarding critical minerals and strengthen our national security, diversify our economy and create job opportunities in our communities," said Manchin, who is the ranking member on the Senate Energy and Natural Resources Committee.

In addition to Manchin, Sens. Martha McSally (R-Arizona) and Dan Sullivan (R-Alaska) have signed on as co-sponsors to the legislation.

"Lithium, graphite, cobalt and nickel are the key enablers of the lithium ion battery and, in turn, the lithium ion battery is the key enabler of the energy storage revolution," Benchmark Mineral Intelligence Managing Director Simon Moores said. "Globally, they are facing a wall of demand especially from electric vehicles, yet the U.S. has been a bystander in building a domestic supply chain capacity."

Murkowski and Manchin hope this newest piece of critical minerals legislation will help get the U.S. off the sideline by garnering the votes needed to land the bill on President Donald Trump's desk to be signed into law.

The American Mineral Security Act aims to codify and build upon President Trump's Executive Order 13817, which instructs federal agencies to devise a strategy to ensure the United States has reliable supplies of critical minerals and metals.

"I greatly appreciate the administration's actions to address this issue, but Congress needs to complement them with legislation," said Murkowski. "Our bill takes steps that are long overdue to reverse our damaging foreign dependence and position ourselves to compete in growth industries like electric vehicles and energy storage."

Before Executive Order 13817 could be put into motion, the very term critical minerals had to be officially defined, a task tackled by the U.S. Geological Survey.

In "Critical Mineral Resources of the United States – Economic and Environmental Geology and Prospects for Future Supply," an 862-page report commonly referred to as Professional Paper 1802., USGS defines critical minerals as:

• non-fuel minerals or mineral materials essential to the economic and national security of the United States;

• vulnerable to supply chain disruptions; and

• serve an essential function in the manufacturing of a product, the absence of which would have significant consequences for the U.S. economy or security.

Using this definition, the geological survey identified 35 minerals, metals and element groups critical to the U.S.

A brief description of these mined materials can be found at 35 minerals critical to the United States.

"For a number of these commodities – for example, graphite, manganese, niobium, and tantalum – the United States is currently wholly dependent on imports to meet its needs," USGS penned in its critical minerals report.

If signed into law, the American Mineral Security Act would codify the methodology used to designate critical minerals and require the USGS to update the list at least every three years.

In addition to keeping a current list of critical minerals, the American Mineral Security act calls for:

• nationwide resource assessments for every mineral considered critical to the United States;

• a 10-year reauthorization of the National Geological and Geophysical Data Preservation Program;

• coordination and study of energy needs for remote mining deposits, including microgrid research and small generation research programs; and

• a study of the nation's minerals workforce.

Together, the provisions of this bill are aimed at highlighting America's potential to produce much of its critical minerals and metals needs, as well as help foster domestic mining of these materials.

As Murkowski attempts to gain momentum for critical mineral legislation in the Senate, Congressman Mark Amodei (R-Nevada) continues to press a similar bill on the other side of Capitol Hill.

On May 7, Amodei reintroduced he National Strategic and Critical Minerals Production Act (H.R. 2531), legislation designed to streamline the mine permitting process for critical minerals in the United States.

"Unfortunately, when it comes to mining critical and strategic minerals in America, duplicative regulations and bureaucratic inefficiencies have forced us to rely on foreign adversaries and competitors for critical minerals, a dependency that threatens the security of our nation and economy," Amodei said. "Permitting delays stand in the way of high-paying jobs and revenue for local, often rural, communities."

This is the fifth straight year that the Nevada Congressman has introduced this critical minerals legislation but has yet to land on the president's desk.

With the National Strategic and Critical Minerals Production Act, Amodei aims to eliminate much of the inefficiencies that plague mine permitting in the U.S. by limiting the total time to authorize a critical minerals project to 30 months, substantially shorter than the roughly seven to 10 years that it currently takes.

"This common-sense legislation has already passed the House the last four Congresses and will not change any environmental regulations, protections, or opportunity for public input," he said.

National Mining Association President and CEO Hal Quinn called on Congress to remove the barriers to reducing America's reliance on imports that can be sourced responsibly in America.

"U.S. mining is one of the most heavily regulated industries in the world, and our lengthy and duplicative permitting process can last more than a decade," he said. "We can and must do better."

Alaska, which hosts significant quantities of at least 30 of the minerals, metals and element groups listed as critical to the U.S., is poised to be a major domestic source of many of these increasingly important commodities.

One of the most advanced of these critical minerals project in Alaska is Graphite Creek, an enormous deposit of one of the most important ingredients in the lithium-ion batteries the power today's electric vehicles.

Moores, a global authority on lithium-ion batteries and the metals that go into them, said it is important that the United States establish a secure supply chain for the graphite, lithium, cobalt and nickel that go into batteries.

"These supply chains are the oil pipelines of tomorrow. The lithium ion battery to the 21st Century is what the oil barrel was to the 20th Century," he said.

And, despite the name, lithium ion batteries need about eight times more graphite than lithium.

Moores forecasts that the amount of graphite needed for batteries will grow by at least 900 percent over the next decade, yet none of this battery material is currently mined in the U.S. 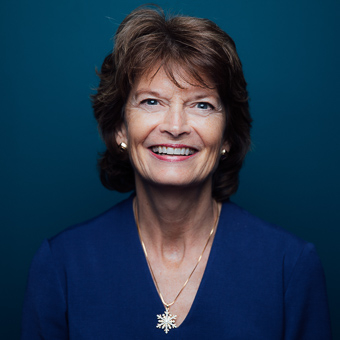 Graphite One Inc. President Anthony Huston, whose company is advancing exploration and development of Graphite Creek, urged lawmakers to take action to help companies like his provide domestic sources of critical minerals.

"We've got to move beyond government lists of critical minerals we lack, and get a clear signal from the U.S. government that projects like ours, and many others involving critical minerals – that our projects matter," he said during a May 2 address to attendees of the battery metals summit in Washington D.C.

The critical minerals bills introduced by Murkowski and Amodei aim to send that signal. Time will tell whether enough members of Congress are as concerned about critical minerals supply chains as the executives of high-tech and electric vehicle manufacturers that use them.