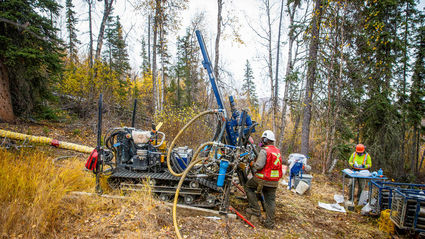 The 2018 drill program on the White Gold property in the Yukon resulted in a 25 percent increase in the gold resource in the Golden Saddle and Arc deposits.

White Gold Corp. June 10 announced a 25 percent increase in the gold resources in the Golden Saddle and Arc deposits at its White Gold property in the Yukon.

"This expansion of the mineral resource estimate further demonstrates the continued success of our systematic data driven exploration methodologies and the value we are generating across our unique portfolio of assets," said White Gold Corp. CEO David D'Onofrio. "We are very pleased with the significant increase in the Golden Saddle and Arc in 2018 with the relatively limited amount of drilling performed."

The expansion of Golden Saddle resources was driven by the 2018 discovery of the GS West zone, which lies about 750 meters west of GS Main; expansion of the GS Main and Footwall zones, and expansion of potential underground ounces.

Roughly 832,000 oz of the gold reporting to the indicated category is found in a high-grade core of the GS Main zone that averages 2.96 g/t gold.

White Gold Corp. said mineralization at both Golden Saddle and Arc remains open along strike and to depth.

"The newly discovered GS West is part of the same mineralized system as the Golden Saddle, all of which we believe can be expanded with additional drilling," said D'Onofrio.

With the financial and technical backing of its strategic partners, Agnico Eagle Mines Ltd. and Kinross Gold Corp., White Gold Corp. plans to complete C$13 million of exploration across its 1.1 million acres of properties in Yukon's White Gold District this year.

One of the company's key objectives for the 2019 season on the White Gold property is test between GS West and GS Main, a 750-meter area where only limited drilling has been previously completed.

Additionally, this year's program will include infill drilling aimed at upgrading resources within the GS Main and GS Footwall zones, as well as expanding the underground resource at Golden Saddle.

The 2019 exploration program on the Arc will consist of step-out drilling along strike of the current resource area and infill drilling on higher grade portions of the deposit.

"Continuing to grow the Golden Saddle and Arc resource will be one element of our fully funded $13 million 2019 exploration program, which also includes plans to expand our 230,000 oz inferred resource on the recently acquired VG Zone, diamond drilling on the high-grade 2018 Vertigo discovery and the generation of additional grassroot discoveries across our 1-million-acre land package in Yukon's prolific White Gold District," said D'Onofrio.

More information on White Gold's 2019 exploration plans can be found at Exciting year shaping up for White Gold, published in the March 15 edition of North of 60 Mining News.