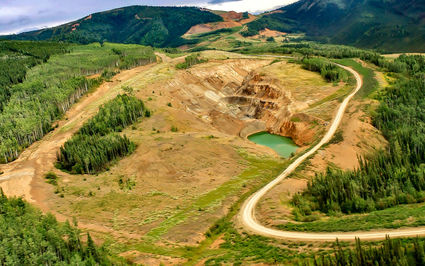 An aerial view of one of the past producing pits at Golden Predator's Brewery Creek gold mine project in the Yukon.

Support from the Yukon government and Tr'ondëk Hwëch'in First Nation is bolstering Golden Predator Mining Corp.'s plans to restart operations at its Brewery Creek gold mine about 55 kilometers (34 miles) east of Dawson City.

During seven seasons of operation beginning in 1996, Viceroy Resource Corp. produced 280,000 ounces of gold at the Brewery Creek Mine. However, with gold prices averaging around US$310/oz in 2002, Viceroy opted to wind down operations and put Brewery Creek on care and maintenance.

A few years later, Golden Predator acquired full ownership of Brewery Creek and has been carrying out exploration and studies aimed at resuming operations at the past producing mine.

The company recently received a formal notification from the Yukon government confirming the validity of the existing Quartz Mining License and Water License for Brewery Creek, meaning Golden Predator is authorized to restart mining activities that follow the previously assessed mine plans without further assessment and review.

Golden Predator and Tr'ondëk Hwëch'in entered into an accord on Brewery Creek seven years ago and they have recently re-formed a joint advisory committee with the First Nation.

"Tr'ondëk Hwëch'in Council remains committed to the agreements and efforts developed in the past; we look forward to working closely with Golden Predator to ensure the operation of the project remains sustainable and ensure that important values of Tr'ondek Hwech'in continue to be reflected through the re-establishment of the Advisory Committee," said "Tr'ondëk Hwëch'in Council Chief Roberta Joseph.

"In 2012, Tr'ondëk Hwëch'in and Golden Predator signed a socio-economic accord for the Brewery Creek project and have established a strong and respectful working relationship," said Golden Predator Mining CEO Janet Lee-Sheriff. "Combining this with the demonstrated support of the Yukon Government to resume mining activities, without re-entering the permitting process, will provide the company a clear path forward to restart the Brewery Creek mine in a timely manner that benefits our shareholders, the First Nation, the community of Dawson (City), and the entire Yukon."

The former Brewery Creek Mine used heap leaping – a method of gold recovery that involves staking ore in a lined facility and using cyanide to separate the gold from the rock – to recover gold mined from seven near-surface deposits on the property.

A 2014 preliminary economic assessment outlined plans for a heap-leach operation that would produce an estimated 372,000 oz of gold over nine years. This includes mining 10.2 million metric tons of open-pit material from eight deposits averaging 1.35 g/t gold and reprocessing material located on the former heap leach pad. 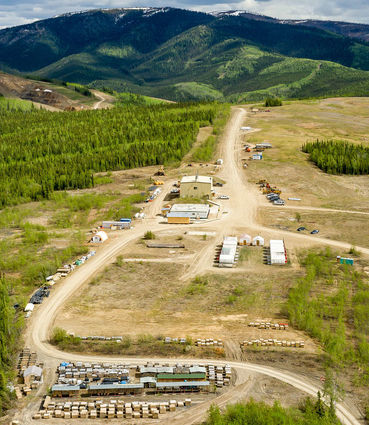 Facilities from past mining, coupled with upgrades completed by Golden Predator add to the advantages of resuming operations at Brewery Creek.

Some of this resource is found outside of the areas permitted under the current territorial licenses. Golden Predator plans to resume mining and processing of resources within the permitted areas while working with Tr'ondëk Hwëch'in and Yukon government to seek amendments to expand activities to the deposits found outside of the existing licenses.

Already holding the land use permit needed to carry out further exploration at Brewery Creek, Golden Predator plans to resume exploration and development drilling this summer to upgrade and expand upon the heap-leachable oxide gold resource across the 180-square-kilometer (69.5 square miles) property.

"Brewery Creek already has a sizeable open-pit oxide resource of superior grade and the potential for making significant near surface additions at a very low cost," said Lee-Sheriff.