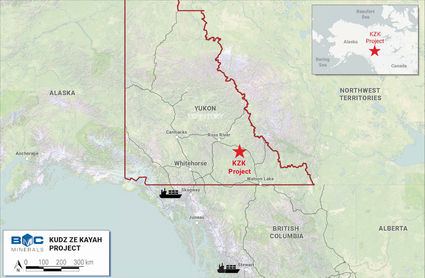 With the completion of Ross River Dena Council's independent environmental assessment review of Kudz Ze Kayah (KZK), BMC Minerals Ltd. crosses a major milestone along its path to developing a zinc-silver mine at this project in southeastern Yukon.

The PFS outlines plans for a 2 million metric ton per year open-pit and underground mining operation to mine these reserves at ABM.

BMC said the compelling economics of the mine detailed in the PFS exceeds the expectations it had for KZK when it purchased the project.

As such, the company submitted its mine development proposal to the Yukon Environment and Socio-Economic Assessment Board (YESAB) in 2017, initiating the permitting process for the proposed mine.

The independent review by Ross River Dena Council, which was conducted by Dena Cho Environmental and Remediation lnc., is an added step to ensure that all parties are comfortable with the proposed mine.

"BMC Minerals recognizes and respects Kaska Dena as traditional owners of the KZK project area and it was important to us that this review was carried out in the right way," said BMC Minerals President and CEO Scott Donaldson. "I'd like to thank RRDC and Dena Cho Environmental for their professional and rigorous review which will help us to ensure the project meets high standards."

The KZK project is covered by an existing socio-economic participation agreement between BMC and the Kaska Nation.

It was under this agreement that Ross River Dena Council arranged for the independent environmental review of the mine development proposal for KZK, which included both technical assessment and community consultation.

With the independent review complete and permitting well advanced, BMC Minerals hopes KDK will deliver its first metal concentrates to markets in 2022.

The mine is expected to create more than 400 direct jobs and generate significant benefits for Kaska communities and citizens, as well as all Yukoners.