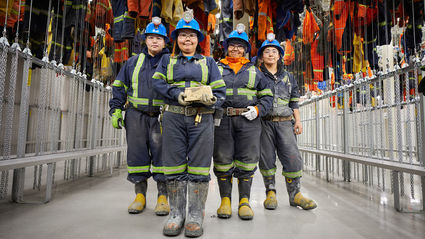 Crewmembers hold a bar from the first gold pour at Agnico Eagle's Meliadine Mine in Nunavut. Meliadine and Amaruq, another new Agnico Eagle mine, are playing a major role in bolstering strong economic growth in Nunavut.

Thanks to the start-up of new mines, The Conference Board of Canada forecasts the economies of Canada's territories to grow significantly over the next two years.

In Territorial Outlook Economic Forecast: Summer 2019, The Conference Board of Canada foresees the combined economies of Nunavut, Northwest Territories and Yukon expanding by 5.3 percent in 2019 and 4.4 percent in 2020.

"Territorial economies are being positively impacted by new mines that are propelling growth in the next few years," said Marie-Christine Bernard, director, provincial and territorial forecast. "However, some of the countervailing winds are the slower Canadian economy compounded by higher geopolitical risk (i.e. Brexit) and weaker growth in the global economy."

Between 2021 and 2025, The Conference Board of Canada predicts growth of the combined territorial economies will slow to an average of only 1.5 percent a year, in part because of the maturing of the mining industry and fewer new mine developments.

Nunavut's economy will grow at a solid pace over the near and medium terms thanks to strength in the mining sector.

During the ramp up of production at Meliadine, which got underway in February, the new Nunavut mine produced 47,281 ounces in the three months leading up to commercial production.

Agnico is also ramping up commercial production at Amaruq, a second new mine in Nunavut.

Amaruq is essentially a continuation of the Meadowbank Mine, which is about 50 kilometers (31 miles) to the southeast.

Ore mined from Amaruq will be trucked to the 11,000-metric-ton-per-day mill at Meadowbank for processing.

The first Amaruq ore was delivered to Meadowbank during the second quarter and commercial production of Amaruq gold is expected to begin in the coming weeks.

Agnico has previously said that it expects this new mine to produce 788,500 oz of gold between now and the end of 2021, including roughly 165,000 oz in only about six months of production this year.

Due to a limited workforce in Nunavut, most of the new jobs created in the territory's mining industry will go to non-residents, as companies must bring in workers from other parts of Canada to fill specific mining skills lacking in the resident population.

While new mines are expected to drive robust growth in Nunavut, The Conference Board of Canada foresees the opposite for Northwest Territories.

In its Territorial Outlook, the Canadian research firm forecasts modest economic expansion for NWT in the near term, hovering around 2 percent, but this growth is expected to slow over the longer term due primarily to weaker investment in the mining sector.

According to the research organization, diamond production has reached its peak and will decline in the next decade. However, two new metal mines are slated to ramp up production in the territory, offsetting some, but not all, of the losses in the mining sector.

More tepid growth in mining will have repercussions on the other areas of the economy, notably construction activity.

To attract new mining investment to Northwest Territories, Premier Robert McLeod has been rallying the federal government to invest in the infrastructure needed to encourage development of the rich mineral potential NWT has to offer and revitalize the territories economy.

"To make good on our energy, climate change and petroleum resources vision for the Northwest Territories, and to fully embrace Canada's status as an arctic nation, we need concrete infrastructure commitments and investments for our territory," he said during an April presentation at the Arctic Encounter Symposium in Seattle.

The NWT premier said that many of Canada's policymakers do not realize the role mining and other resource development plays in his territory and across the North.

"Responsible resource development and socioeconomic wellbeing go hand-in-hand in the Northwest Territories and this relationship will continue to be important to our economy going forward," he said.

McLeod said that while NWT is endeavoring to diversify its economy, other industries such as tourism and agriculture will not replace mining and other resource development in the short term.

The Conference Board of Canada predicts that weaker economic growth will encourage more workers to exit the territory, leaving a smaller working-age population to cover the costs that come with growth in the number of seniors.

The only sector of the economy that will record employment growth is non-commercial services, which includes the health care sector.

The Conference Board of Canada expects a slowing of the Yukon economy this year but then a quick rebound in 2020. This coming growth is to be driven by new and revitalized mines in Canada's westernmost territory.

Currently, Victoria Gold Corp. is ramping up operations at Eagle Gold, Yukon's next large-scale gold mine.

The soon-to-be gold producer has begun stacking ore on the heap leach pad at Eagle and expects to pour the first gold bar in September.

Eagle Mine will employ roughly 350 workers and Victoria hopes at least half of these will be filled by Yukoners.

In June, roughly 50 percent of the hired staff where Yukoners, including several citizens from the First Nation of Nacho Nyak Dun, the traditional territory where Eagle Gold is located. 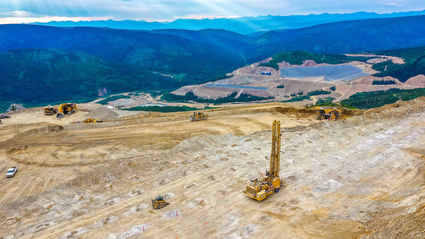 Victoria Gold's Eagle Gold Mine is on track to pour gold in September. This operation is helping to boost the economy and provide jobs in the Yukon.

At the same time as Victoria's nearing production at Eagle Gold, Pembridge Resources is working toward resuming operations at its newly acquired Minto copper mine in the Yukon and Newmont Goldcorp is advancing the Coffee Gold Mine project in the territory's White Gold District toward development.

Together, these mines and development projects are expected to put a strain on Yukon's limited workforce.

The Conference Board of Canada predicts that Yukon's unemployment rate will remain well below 4 percent over the next several years, and labor shortages will become a problem.

This is good for current Yukoner's pocketbooks as wages are expected to grow at an average annual pace of 3 percent between now and 2025, much faster than inflation.

Yukoners are older than their Northern neighbors, and domestic migration will account for most of the population growth to fill workforce shortages in the coming years.