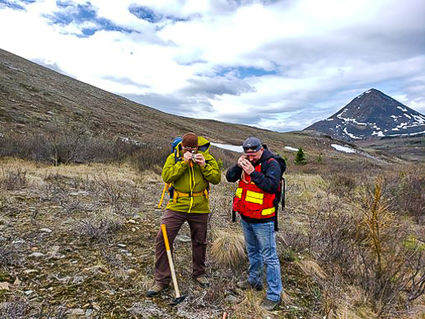 "We are excited to start our first ever drilling campaign at the Atlin Goldfields project," said Brixton Metals Chairman and CEO Gary Thompson.

Brixton's Atlin property consists of roughly 1,000 square kilometers (386 miles) of mineral claims that extend east from the community of Atlin and blanket an area that has produced more than 600,000 ounces of placer gold from 1898 to 1946. While placer gold production from this area continues, records of this production have not been tracked since 1946 and the total likely far exceeds 1 million oz.

Brixton began its first phase of 2019 exploration with a 1,965 line-kilometer helicopter-borne magnetic geophysical survey, which is being used to map lithological contacts and major structures around Yellowjacket, a historical mine area in the northwest corner of the property.

Nearly 130,000 oz of placer gold from Pine Creek and high-grade lode gold has been identified in the area.

Much of Brixton's 2019 program is focused on exploring new prospects identified across the western side of the Atlin Goldfields property with similar high-grade lode gold potential.

Toward this goal, Brixton collected 167 soil and 29 rock samples at the Imperial, LD and Union Mountain zones.

Imperial, a past producing lode gold operation roughly 3,000 meters northwest of the Yellowjacket Mine, dates back to 1899.

Elevated gold-in-soil values identified in soil sampling appear to coincide with interpreted geophysical features near the historical Imperial mine and one rock sample collected from the area returned 8.57 g/t gold.

"We are encouraged by the gold-in-soil and magnetic geophysical features around the Imperial Mine," said Thompson.

The LD showing is a new prospective zone about 10 kilometers (six miles) southeast of Yellowjacket.

One rock sample collected at Union Mountain, located across a creek valley to the northwest of LD, contained 6.1 g/t gold.

"Our work in Atlin this year has focused on the western portion of the property with good road access. It is to be determined whether this area may be a new vein corridor system reaching from the Imperial mine to Wilson creek in a northwest-southeast trend for approximately 20-kilometer (12.5 miles) inclusive of the Yellowjacket, Union and McKee areas," said Thompson.

Brixton Metals plans to complete around 3,000 meters of shallow core drilling, as well as additional rock and soil sampling to refine drill targets in this priority area.

Additionally, the company plans to follow up on gold-in-soil and elevated tin-tungsten-bismuth-in-soil geochemical anomaly on the eastern edge of the property.