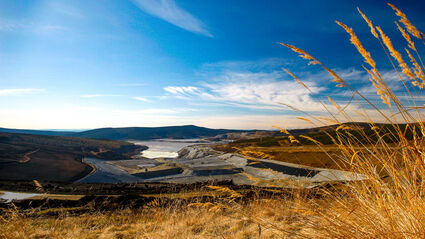 Looking over the Walter Creek Heap Leach pad in 2010. Today, this facility is nearly at its maximum capacity and Kinross is building a new heap leach pad to extract gold from ore mined from the Gilmore project.

The higher production, when compared to the first quarter, helped push down the costs to produce an ounce of gold at this open-pit operation about 25 miles north of Fairbanks. The cost for each ounce of gold sold during the second quarter was US$910, compared to US$1,023/oz during the first three months of the year.

Production costs per ounce at Fort Knox typically go down during the second quarter due to the increased gold recovery from the heap leach pads during the summer months.

The second quarter 2019 gold production costs, however, were also down compared to the US$969/oz during the same period of 2018. Kinross attributes this year-over-year drop to lower operating waste mined and favorable processing costs.

Kinross anticipated lower production at Fort Knox during the first quarter due to a strategy to preserve tailings storage capacity for the highest grade ore.

Kinross said the Gilmore project at Fort Knox remains on schedule and on budget, with initial ore from the expansion project now scheduled to be stacked on the heap leach pad by the end of this year.

A feasibility published for the Gilmore expansion last year envisions nearly all of the gold mined from Gilmore will be recovered via heap leaching, a process that involves stacking the ore on a lined pad and using a mildly acidic leaching agent trickled over the ore to dissolve the gold into a solution that is pumped through a facility that recovers the gold.

To accommodate the ore mined from Gilmore, Kinross has begun construction on the Barnes Creek Heap Leach Pad.

Construction of this new heap leach pad is underway and proceeding well, with half the impermeable liner now laid.

Dewatering for the Gilmore pit expansion is proceeding according to plan and stripping for the initial Gilmore pushback is on target to begin late in the third quarter.