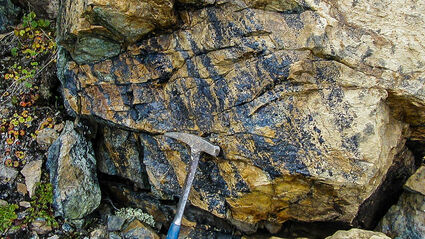 This outcrop on New Age Metals' Genesis property is striped with chromite seams carrying both platinum and palladium.

Situated along the Richardson Highway about 75 highway miles north of the deep-water port city of Valdez, Genesis is an under-explored palladium-platinum-nickel-copper property with great infrastructure.

Previous sampling at Sheep Hill, one of the targets identified on the 10,240-acre Genesis property, returned up to 2.4 grams per metric ton palladium, 2.4 g/t platinum, 0.96 percent nickel and 0.58 percent copper.

A 40-meter-thick mineralized reef at this prospect has been traced for 850 meters along surface and is open in several directions.

The property also hosts a separate style of chromite mineralization containing up to 2.5 g/t palladium and 2.8 g/t platinum.

While surface PGM mineralization has been identified over a 9,000-meter stretch of Genesis, no drilling has ever been carried out on this project that is less than two miles from a paved highway and an electric transmission line.

New Age Metals Chairman and CEO Harry Barr told Mining News that this ease of access, superb infrastructure – along with the PGE-nickel-copper mineralization right at surface – makes Genesis the type of property that major mining companies are looking for.

To further refine drill targets on this Southcentral Alaska property, Fairbanks-based Avalon Development Corp., is carrying out a three-phase program for New Age this year.

The summer 2019 field program on Genesis is intended to map hydrothermal alteration to better define drill targets on the project and will involve three phases of work.

This program will start with ASTER (advanced spaceborne thermal emission and reflection radiometer) processing and interpretation to map potential alteration targets to assist district-scale PGM-copper-nickel sulfide exploration. The end goal of this phase is to generate three false color images, which is expected to better delineate alteration targets, as they show up distinctively as color anomalies.

The second phase will involve the processing and interpretation of NASA Landsat TM (thematic mapper) imagery. 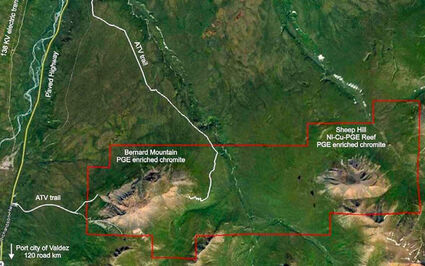 Situated just east of the Richardson Highway and electrical power running to the deep-water port city of Valdez, which is about 75 miles further south, the Genesis palladium-platinum-nickel-copper project has the benefit of great infrastructure.

Finally, the 2019 program will involve the reprocessing and re-interpretation of magnetic, electromagnetic (EM) and induced polarization (IP) geophysical surveys carried out on the property.